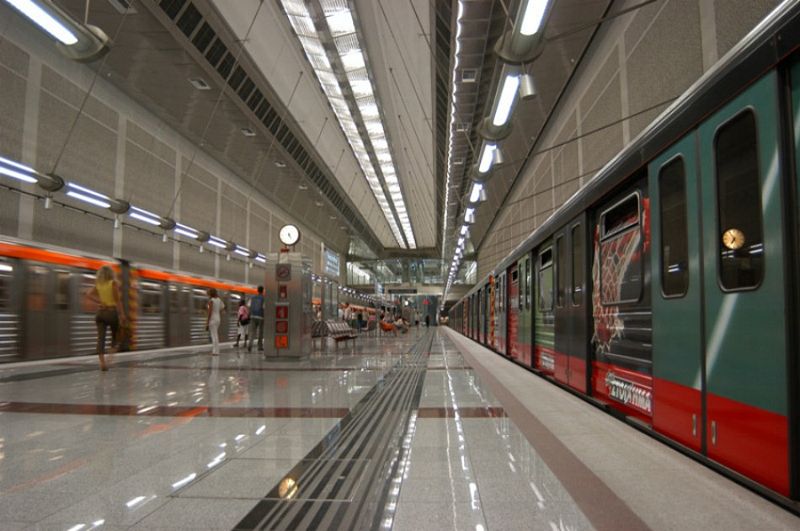 The new line planned for the Athens Metro (Attiko Metro) will be 8.1 km long and will begin at Veikou Park (Alsos Veikou) passing through Galatsi, Kypseli, Evelpidon courts, Alexandras Avenue, Exarchia, Akadimia, Kolonaki, ending at Evangelismos, and will cost 900 million euros.
The tunnel boring machine will dig under the most densely populated neighborhoods in Athens, realizing the largest metro network after Line 1 was inaugurated in 2000. Metro Line 4 will be 50% funded by the European Investment Bank (EIB) through a 450 million euro loan and 50% through the new National Strategic Reference Framework (NSRF).
It is estimated that the new line will serve 254,000 commuters daily, raising the number of daily passengers along the grid to 1,832,000. The project plans took some eight months to complete and are to begin soon.
The biggest impediment to the project so far are reactions to the construction of a station at Kolonaki by local inhabitants and shop owners who fear the construction will impede commercial activities. Attiko Metro S.A. has been directed by Minister Michalis Chrisochoides to look into alternate venues, like a station at Koubari street.
Last month, Attiko Metro S.A. completed all required tests and certifications, while delivering seventeen new trains to the Urban Rail Transport S.A. (STASY S.A.), which are expected to be soon put into service in the Metro network, especially for the new lines covering the areas of Elliniko, Anthoupoli and Agia Marina, as well as the future Metro extension to Piraeus, Greece.
Particular emphasis was given on the energy performance of the new trains and the key criterion was the minimization of energy consumption, thus making the 3rd generation trains of the Athens Metro exceptionally friendly to the environment. Moreover, A/C system and all other necessary technical features have been incorporated in the new trains, making them compatible with the future technological improvements as foreseen to be implemented in the Athens Metro Lines 2 & 3.
In pursuing its construction activities, Attiko Metro S.A. is currently developing the Metro Line 3 extension to Piraeus, consisting of 7.6 km of tunnel and six stations, as well as the Tramway extension from Peace and Friendship Stadium (SEF) to the center of Piraeus, consisting of 5.4 km of single track and twelve stops.