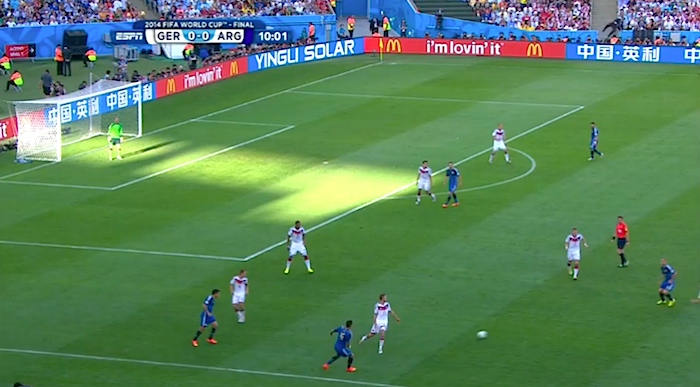 The World Cup final between Argentina and Germany is still level at 0-0 after the first half in Maracana, Brazil.

RIO DE JANEIRO (AP) — Neither Germany nor Argentina was able to get a goal in the first-half of the World Cup final on Sunday. Argentina was the more dangerous team in the first 45 minutes of play, and forward Gonzalo Higuain the most dangerous player.
The Napoli striker missed a great chance to put his team ahead in the 21st minute, shooting wide of the net after an errant headed backpass. He then had a goal ruled out for offside in the 30th.
Germany was forced to play without Sami Khedira, who pulled out of the starting lineup minutes before kickoff and was replaced by Christoph Kramer.
Kramer, however, was first injured in the 18th minute and then was replaced by Andre Schuerrle in the 32nd with what appeared to be head injury.
Schuerrle, who scored the last two goals against Brazil in the 7-1 semifinal rout as a substitute, then had Germany’s best chance in the 37th, but Argentina goalkeeper Sergio Romero made the block.
Benedikt Hoewedes’s stoppage-time header hit the post.
The Argentines, with Lionel Messi leading the attack, made several dangerous moves forward, but Gonzalo Higuain sent the team’s best chance wide in the fourth minute.
With Messi in the starting lineup, Argentina has one of the best players in history on the field. The four-time world player of the year has had a stellar World Cup so far, and a win on Sunday will give him the one major title he is missing.
For Germany, a team led by Philipp Lahm and Bastian Schweinsteiger is trying to finally win a major trophy after a nearly 20-year wait. But they’ll have to do it without Sami Khedira, the Real Madrid midfielder who was ruled out of the final only minutes before kickoff and was replaced by Christoph Kramer.
The Germans, whose last major title came at the 1996 European Championship, reached the World Cup final in 2002 and the semifinals in 2006. They also reached the final at Euro 2008 and the semifinals at Euro 2012.
Historically, however, Germany has been a repeat winner. The national team is trying to win its fourth World Cup, but the first for a united country. West Germany won in 1954, 1974 and 1990, while a united Germany lost in the 2002 final to Brazil.
Argentina is a two-time champion, winning titles in 1978 and 1986.
The last World Cup title for each team came against the other. The Argentines, led by Diego Maradona, beat West Germany in Mexico in the 1986 final, while the Germans leveled the series by winning four years later in Italy.
Sunday’s match is something of a tiebreaker, and it comes at one of the most iconic football venues in the world.
Lineups:
Germany: Manuel Neuer; Philipp Lahm, Mats Hummels, Jerome Boateng, Benedikt Hoewedes; Christoph Kramer, Bastian Schweinsteiger, Toni Kroos, Mesut Ozil, Thomas Mueller; Miroslav Klose.
Argentina: Sergio Romero; Pablo Zabaleta, Martin Demichelis, Ezequiel Garay, Marcos Rojo; Lucas Biglia, Javier Mascherano, Enzo Perez; Ezequiel Lavezzi, Gonzalo Higuain, Lionel Messi.
The Trophy
The winning captain, either Argentina forward Lionel Messi or Germany defender Philipp Lahm, will soon hold aloft the most recognized trophy in sports, watched by hundreds of millions of television viewers worldwide and 74,000 spectators at the Maracana Stadium.
The world-famous arena nestled among Rio de Janeiro’s hills, high-rises and favelas was packed to the rim with boisterous fans and sharply dressed VIPs.
Copyright 2014 The Associated Press. All rights reserved. This material may not be published, broadcast, rewritten or redistributed.