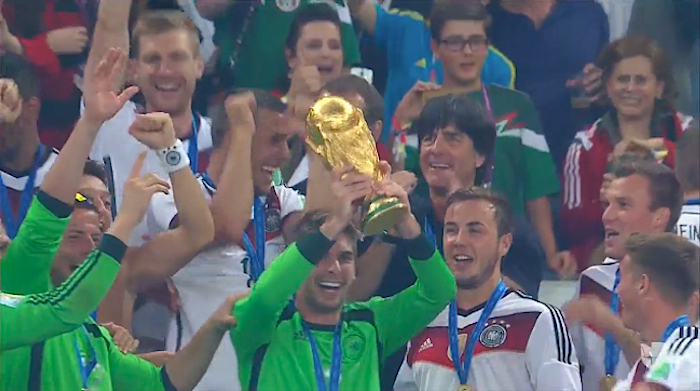 Germany wins the World Cup
With a wonderful cross that came of his chest, Götze scored the most important goal in his life and has given Germany their 4th World Cup trophy and first since 1990. It was in the 112th minute of the 2nd half of extra time, when Schurrle made a run from the right, dribbled through three defenders and whipped a cross onto oncoming Gotze who didn’t miss facing Argentine keeper Romero.
Latin America vs Europe, Poor vs Rich, The Gauchos vs the Panzers, Messi vs Muller, Argentina vs Germany. The 2014 FIFA World Cup final came and went, and took with it some of the greatest performances we’ve ever seen in football.
There hasn’t been a team in history that has deserved to lift an important soccer trophy as much as this German team. Making the World Cup final in 02′, the semis in 06′ and 10′, and the European Cup final in 08′ and semis 12′, and especially after that crazy 7-1 domination over World Cup hosts Brazil, no one doubted their time had come.
This was the 3rd time in a row a European team wins the FIFA World Cup and first time in history a European team wins it in Latin America.
First Half
The Germany vs Brazil game was a once in a lifetime game, so no one was expecting to view a similar one again. Germany held the ball and kept possession but it was actually Argentina that made all the chances. Higuain’s one-on-one with Neuer went wider than one would expect from a striker of his caliber. A few minutes later, the Napoli striker scored but his goal was rightfully disallowed as off-side by Italian referee Nicola Rizzoli. The arbitrator kept the heart-heated players under control and didn’t allow the game to get out of hand. First half went without Germany being able to make their presence notable besides in the last minute when Howedes headed the post, leading both teams to the locker rooms with a 0-0 score on the stadium’s electronic board.
Second Half
Argentina’s style of compacting and staying close, covering gaps and not forcing plays, worked for them and they kept looking like the team that could come out of nowhere and grab the win. Messi’s only chance in the game came early in the 2nd half when he booted the ball a foot wide of Neuer’s post and apart from that it was just a game played in the middle with strong challenges and minimal chances.
Extra Time
Everything that was missing in the regulation period appeared in extra time. In the first minute of it, Andre Schurrle slammed the ball but Romero blocked it away and minutes later 2nd half substitute Palacio missed an even greater chance when Neuer’s massive body startled him and made him waste his opportunity away. It wasn’t till the 113th minute that Germany’s substitutes Scrurrle and Götze co-operated finally, for the latter to put the ball in the back of the net and get millions of Germans off their couches and off to the streets. Argentina forced a few long balls in the last minute but nothing came of it, making Germany the 3rd team (Italy and Brazil are the other 2) with 4 World cup trophies in their collection (1954, 1974, 1990, 2014).
Formations
Argentina: Romero, Demichelis, Zabaleta, Garay, Rojo, Mascherano, Perez (Gago), Biglia, Lavezzi (Aguero), Messi, Higuain (Palacio)
Germany: Neuer, Lahm, Hummels, Howedes, Boateng, Schweinsteinger, Kramer (Schurrle), Muller, Kroos, Ozil, Klose (Götze)