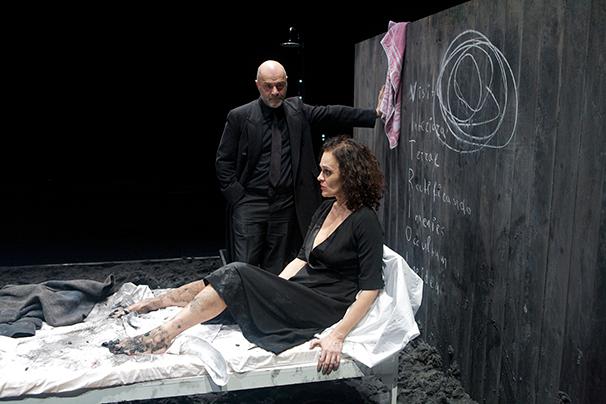 The Greek National Theater goes to the French Avignon Film Festival for the first time. The Festival takes place in the beautiful French city of Avignon from July 4th to the 25th.
The Avignon Film Festival takes place every summer since 1947 and it is the oldest Film Festival in France. It is an international event in which French, European and American independent producers present their work. Three Greek plays are taking part in this year’s festival: Nature Morte, Vitrioli and The Square of the Circle .

The debut was the play, Nekri Fisi (Nature Morte), staged from July 9-12. In a time we guess to be very close to ours, a city reminiscent of Athens that is occupied by a foreign army is the scene of violent events. An anonymous voice calls out to “the citizens,” encourages them to perform various acts on their own bodies (shaving, castration, sex change, etc.), in a discourse that brings to mind a twisted orthodox liturgy. Wild acts on stage seem to turn the world into chaos. Humans, animals, objects and materials, pieces of furniture, abstractions and feelings cross paths and collide. Director Michel Raskine leads a group of nine student-actors in the play that is written in a gushing, yet controlled language.

The second play is Vitrioli and will be performed from July 10th to the 19th. It is written by Yiannis Mavritsakis and it was first presented at the “Nikos Kourkoulos” theater stage in Athens in 2012 and 2013. The director of the play is French Olivier Pi. Vitrioli is a provocative play about a mother and her Oedipus complex relationship with her son.

It is the story of a family, set against the backdrop of a crisis, of an intimate war. It is about Greece of today, but in an indirect manner; it speaks of humanity, but never in terms of economic and political concepts. It tells of a catastrophe, of a world where nothing is possible anymore, of a sacrificed generation that dies without even trying to rebel anymore. Its main character is a young man who is aware of his inability to do anything, to escape other people’s desires (be they a potential girlfriend, his mother, a hermaphrodite, his priest, his doctor, even strangers).
He accepts his role as the object of other people’s fantasies, of their neurotic projections, of their fears and anxieties. It owes a lot to ancient Greek tragedy, it is also much darker.

There is no salvation to be found, not from the heavens, not from within, not from art or from words. The pessimism of Vitrioli is only equalled by its lucidity. Mavritsakis holds a mirror to his country and to a youth that has lost all spirituality. This is echoed by the stage design that has the audience see themselves while watching the catastrophe unfold, like a choir, against a backdrop of mud and light.

Finally there is the play The Circle of the Square that will be staged from July 22-25. It is a sprawling and terrifying play, based on the repetition and combination of four initial scenes, of what looks at first glance like four unremarkable romantic situations. First there’s Jade, who wants to come back to Green, whatever the cost, but the price set by Green is so high that is impossible to pay.

Then there’s Yellow and Red, who wonder which one of them Blue likes the most, and who has to make a decision. There’s also Violet, who left Mauve after years of marriage in order to move in with Grey, who isn’t quite ready to commit to living with someone else. And then there’s Black, who wants to crack the secret of Skye, who can’t seem to make Skye come. Infinite variations on those basic events slowly create a frightening maelstrom that builds up momentum and culminates in a headlong rush.

None of the characters are able to solve the problems they face. Words never give way to silence but instead turn into a scream that reflects the struggle each character goes through as they try to answer for their own existence and responsibility. It is by causing, then accepting, catastrophe that each character is able to make his or her voice be heard; they all meet death, then escape it by overcoming the banality of their existence.

Director Dimitris Karantzas demands of his actors to be keenly aware of the situations they are going to be acting out in front of the audience even before they set foot on stage. He has found in this play by fellow Greek writer Dimitris Dimitriadis a work whose stakes are commensurate with his own dramatic practices.