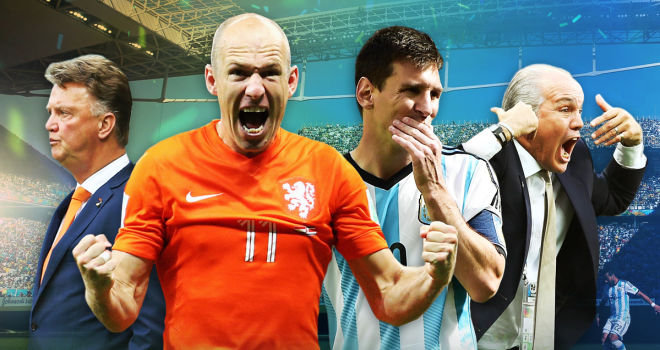 Argentina off to the Final
Romero’s saves in the penalty kick shootout, Mascherano tackles and overall performance and Lavezzi’s few but crucial attacking runs, where the reasons Messi and his crew are heading to the FIFA 2014 World Cup final. A 0-0 scoresheet meant that the game would have to be decided on penalty kicks in which Romero saved two and the Argentinians scored all four (4-2).
After witnessing yesterday’s most insane soccer game in the World Cup history, where Germany bombarded Brazil 7-1, today’s game expected to bring us back to reality. In a World Cup with staggering group stage games and plenty of surprise results, the playoffs balanced the beauty and delivered us with barely a handful of good games. That was naturally the case till yesterday, when the world was turned upside down and we had to pinch ourselves to make sure we were really awake.
The Brazilian fans, in a devastated Sao Paolo, had to bring themselves together and head to the field to watch another historical battle, that of Argentina and Holland, a reprise of the famous 1978 final, where Mario Kempes’ side led the Argentinians to a 3-1 victory in extra time. That had been the Oranje’s second lost final in a row as they had underestimated the Germans in the 1974 final (they were arguably a much better team).
Argentina has been a favorite from the beginning of the tournament but had thrown away that title with their unimpressive football tacticts of leaving everything up to Messi. The undoubtedly best player in the world right now, only needs to lift this trophy so he can be also considered one of the greatest of all time, next to Pele, Maradona and Zidane. Holland on the other hand, came in this Mundial as a 2010 World Cup finalist but hardly captivating as a team to get to the semis. With some mesmerizing football at times however (and an easy draw), they certainly deserve to be where they are.
Starting lineups:
Van Haal’s side sticks to its 5-3-2 formation with Kuyt, Vlaar, Martins, Blnd and Vrij in the back, Sneijder, De Jon and Georginio in the middle and Van Persia alongside Robben up front.
Argentina following the usual 4-3-3, with Zabaleta, Demichelis, Garay and Rojo forming the back line, Pérez, Mascherano and Biglia the 3 center midfielders and Higuain, Lavezzi and Messi as the 3 strikers.

First Half Analysis:
The supporters have been the liveliest of all in this second semifinal game, as both the teams are concentrating on keeping a clean sheet. Messi and Robben are viciously brought down on their every touch disallowing them from being creative. A couple of Lavezzi’s fine plays are all we keep from this first half and corner kicks that never made their target.
Second Half Analysis:
A dreadful display from both teams is what millions of us are still forced to watch. Nothing of interest to report besides a mistakenly disallowed goal by Higuain that could’ve had Argentina in the final already. Holland came forward in the last few minutes unable to put the ball in the box though. Off to extra time.
Extra Time Analysis:
After watching the reply, it turns out the disallowed goal in the 2nd half, was actually not a goal. Sorry for the confusion. It seemed like it from the reply. Now, although exhausted and worn down by the heavy rain and the never-ending 2013-2014 season, the players found a few last breaths to threaten each others keepers. Namely in the 2nd half of the extra time, Argentina could have finished the match if its strikers were more successful. Off to penalty kicks!
Penalty Shootout:
Two brilliant saves by the Argentine kepper Romero became the deciding factor between the two teams and Argentina will now challenge Germany for their 3rd trophy in history and first since 1986.