Poll: Greeks Tend not to Barter or Buy Second-hand Goods 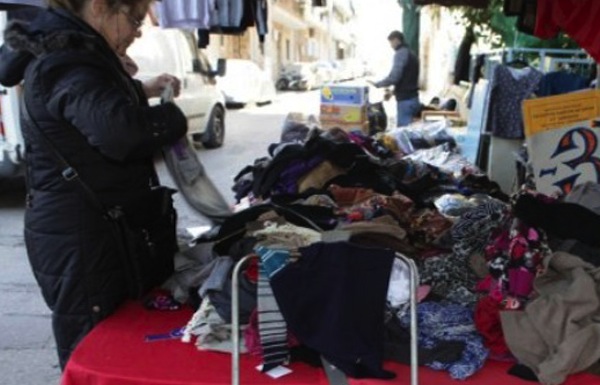 The majority of Greeks tend not to barter goods or buy second-hand items, according to a Public Issue survey commissioned by WWF Greece and unveiled in Thessaloniki on Wednesday. This found that only 12% of Greeks had bartered some item for something else and that only 14% had bought used goods. Seven out of ten Greeks, conversely, had given items away, either to their family and friends or to charity.
The survey was conducted to explore the habits of Greeks in terms of reusing, buying second-hand, donating or exchanging goods, as part of WWF’s “Better Life” programme. It was conducted on June 11-19 using a sample of 1,009 people in Athens, Thessaloniki, Patras, Iraklio and Larissa.
Based on the survey, 85% of Greeks have not bought used goods in the last year, only 12% have exchanged goods and 63% appear willing to take a step toward “barter culture”. A majority of 68% has given things away in the last year, primarily items of clothing but also books and electronics. The market for second-hand goods mainly concerns cars, clothes, electrical appliances and furniture.
Questioned about the lack of a barter culture, 18% of Greeks said they don’t need it, 14% that it’s not part of their philosophy and 10% considers that they don’t have superfluous items. Giving or exchanging goods is mostly restricted to family and friends, while three out of ten that have given something away or exchanged something in the last year, have done so with an institution, organisation and church parish in their area.
The “Better Life” programme, funded exclusively by the Stavros Niarchos Foundation, is opening up the dossier “Look at it differently” that aims to inform and sensitize the public on issues of reuse, donation and exchange of everyday items. It will include actions such as events on barter swap bazaars, instructions on how to produce items using materials that would otherwise be thrown away, competitions and a festival on barter and reuse next September.
(source: ana-mpa)

Russia to Give Jewish Holocaust Archives Back to Greece