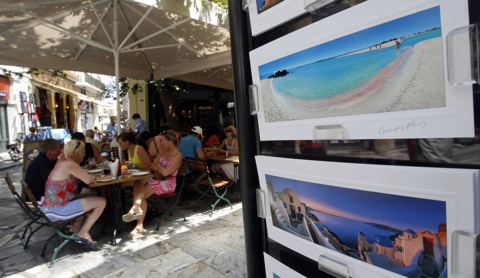 A new survey conducted by the travel website Tripadvisor has shown that tourists visiting Greece spend about 100 million euros per year in tips only. Employees in restaurants, bars, hotels, and other tourist services enjoy the benefits of tipping, especially from Americans, who are more likely to leave tips, even when the service provided is below their expectations.
The survey was based on 25,000 participants, who were questioned about their tipping habits during their holidays in Greece. More than 50 percent of respondents stated that they leave an average tip of 10 euros to tourist service staff in Greece. Americans, Germans and Brazilians were on top of the list of tippers with percentages of 60, 49 and 33 percent respectively. Next are the Spaniards with 30 percent and Russians and Britons follow with 28 and 26 percent respectively. French and Italians, on the other hand, tend to be a little tight-fisted, since only 15 percent and 11 percent of them respectively said they left tips on their holidays in Greece.
The Americans seem to have a strong sence of obligation towards tourist industry workers since an extremely high 97 percent of them answered positively about leaving tips to people working in restaurants and taverns and 81 of the respondents also said they tipped taxi drivers. The hotel porters were also tipped by 79 percent of the Americans. Bar staff (71 percent), room service (73 percent)  and cleaning staff (69 percent) were not an exception and were tipped by American tourists. Things were very different for hotel gym staff and swimming pool workers who received tips from only two and seven percent  respectively by Americans. Offering great service was not the most important criterion for the American respondents, since one-third of them replied they left tips out of obligation, even though the service provided was of the worst quality.