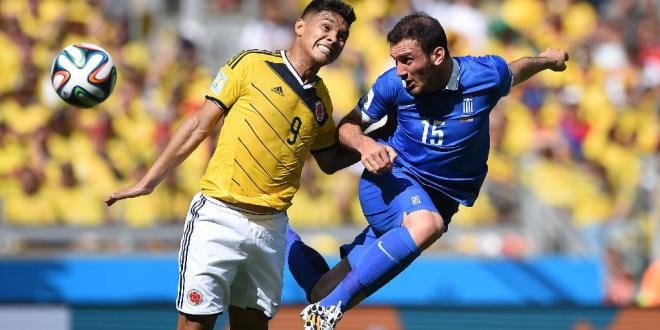 Greece’s game against Colombia, last Saturday, was a disappointment. They failed to score goals and lacked determination.  Only a few players managed to meet their coach’s expectations on the field.   Consequently, Greece’s manager, Fernando Santos will make changes in the starting lineup.  Spiros Karnezis could have played better. He had some slow reactions, but he did not make any serious mistakes, therefore he will remain Greece’s goalkeeper against Japan.
Vassilis Torosidis was one of Greece’s best players. However, the Portuguese manager is thinking of keeping out Jose Holevas, and may use Loukas Vintra in his place, on the right back. Therefore, Torosidis will switch to the left.
Fernando Santos had some thoughts about using Vaggelis Moras instead of Kostas Manolas, Olympiakos’ team defender, at Greece’s starting lineup. As a result, Kostas Manolas and Sokratis Papastathopoulos will play once more in the center of the defense.
In the midfield, Panagiotis Kone was quite vigorous and troubled the Colombian defenders in the previous game.  Kostas Katsouranis may stay on the bench, because he was too sluggish to follow the opponents’ rhythm last Saturday. In case Katsouranis stays on the bench, then Alexandros Tziolis or Giorgos Karagounis may be playing in the starting lineup.  Yiannis Maniatis is expected to maintain his place among the 11 national’s team players.
Greece will probably make a few changes amongst its strikers. Yiannis Samaras will continue to be in the starting lineup, but Dimitris Salpigidis and Fanis Gekas will return to the bench.   Greece needs more speed upfront from Yiannis Fetfatzidis of Genoa FC as well as strength from Kostas Mitroglou of Fulham FC.
The next game of the Greek team is on Thursday against Japan, who also lost their opener (to Ivory Coast) and will therefore be as desperate as the Greeks for victory.