GRNews
GreekReporter.comGreeceOpinion: Greece is in Brazil to Win the World Cup!

Opinion: Greece is in Brazil to Win the World Cup! 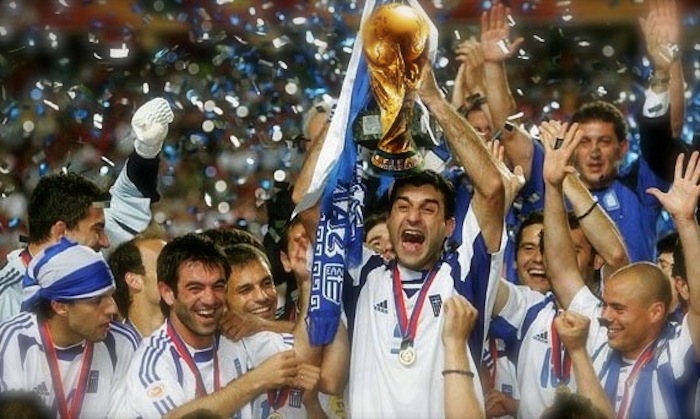 Sure, Greece is an overestimated team. Far up in FIFA’s world rankings (currently sitting at No12 above Holland and France), scores one goal every 147 games and struggles to beat teams like Liechtenstein or Bolivia. They do not possess world class midfielders or strikers to penetrate tough defenses nor have they beat any top teams since the Euro of 2004. Most of the Greek footballers either play for Greek teams, or, teams abroad that hassle not to get relegated. I could go on and on.
Here’s something that never crosses our minds and even our soccer players don’t think of. They dream of it when they’re young, but it’s a known fact that as we grow old, we tend to shoot our dreams down and become more realistic. GREECE  IS  IN  BRAZIL  TO  WIN  THE  WORLD  CUP.
When Greece steps in the game against Colombia on Saturday, what will its utter goal be? To win!
Say they do and then they play the next game against Ivory Coast, what will their goal be then? Will it have changed? No, they’ll still focus on winning the match.
Two wins take us to the next round. Then we’ll be drawn in the final 16 against either Uruguay, Italy or England. Tell me what will our goal be then? To look at each other and nod how well we’ve done, let’s head home now? No! It’s to win and qualify to the final 8.
Up to the final, every single game, our goal is to win. Whether it’s Brazil or Honduras (the weakest country participating in my opinion) the goal is to win and qualify. No one ever settles for less before the game. Which means that before every game, they aim to reach the final and eventually win the trophy.
History has taught us that surprise teams go a long way (Ghana in 10′, Turkey 02′, Croatia 98′, Bulgaria 94′) but are never crowned the winners of the World Cup. In the end, it’s only one of the favorites that sit on the throne. Brazil, Italy, Germany, Argentina, France, Spain are the bets’ faves to win just like every World Cup before this. And most likely, they will.
No matter what history presents us though or what any fancy-pancy reporter types, there is one thing that can’t be taken away from us; to dream. And we dream that Greece will become the first underdog country to win a World Cup. We’ve done it before in the Euro Cup. Why not do it again?
Good luck to all teams. May we see great football and may Greece win the trophy!