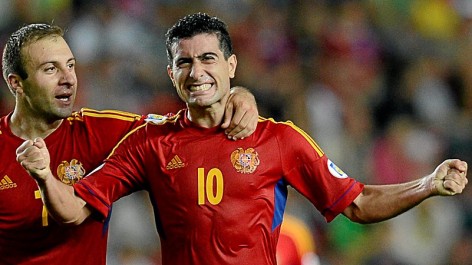 Greek champions, Olympiakos, have signed 26 years-old Gevorg Ghazaryan from Armenia. Ghazaryan plays in the left winger position and has 41 caps with the Armenian National Team, having scored 9 goals. The previous season, Gkazaryan played in 21 matches for  the Ukranian team Metallurg Donetsk, and went on loan for 9 games to Shakter from Kazakhstan.
The Armenian striker, who is distinguished for his technique and speed, has signed a two year contract with the “reds”. Olympiakos will fight in UEFA Champions League next season and is once more the favorite for wining the Greek championship.
During a 2014 FIFA World Cup qualifier match between Armenia and Bulgaria, Ghazaryan was sent off for hitting the ball on a… ball boy  in 2012.

Dogs Can Tell Difference Between Familiar and Unfamiliar Languages