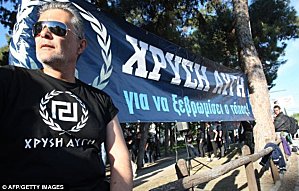 In a letter recently published by the U.K. newspaper The Independent, a Greek immigrant having studied and finally moved to Britain refers to the recent political upheaval in Britain, the euroscepticism, the radical political hate rhetoric and the skyrocketing approval ratings of the U.K. Independence Party (Ukip) and its right-wing leader Nigel Farage, while drawing parallels to the crisis-related social and political developments taking place all over Greece.

“I have seen recession-related hate rhetoric at work in Greece and I know its consequences. When people get used to hearing extreme views and learn to justify their loathing on moral grounds, it’s hard to control the outcome,” Loukia Gyftopoulou mentioned in her comment on The Independent.

While referring to the rising hatred of foreigners, endorsed by the country’s media and politicians, Gyftopoulou notes “anti-immigration rhetoric has become so openly hostile that social division seems only a step away. People are beginning to feel at ease with the idea of hating, targeting and discriminating and they’re unlikely to ignore these feelings even if all immigrants are out.”

“In Greece’s case it started with small, almost amusing incidents similar to the Farage egg episode in Nottingham, and escalated to the cold-blooded murder of leftist rapper Pavlos Fyssas in September 2013. Let’s hope Britain will not have to face such sad truths,” she said referring to Fyssas’ murder last year by killers aligned with Greece’s neo-Nazi Golden Dawn party.

“I love this country as much as I love my own and I do not want to see it lose its broad-minded character. I need it to remain an inspiration of culture and social unity, regardless of whether I will be within or outside its borders,” the Greek immigrant to the U.K. added.