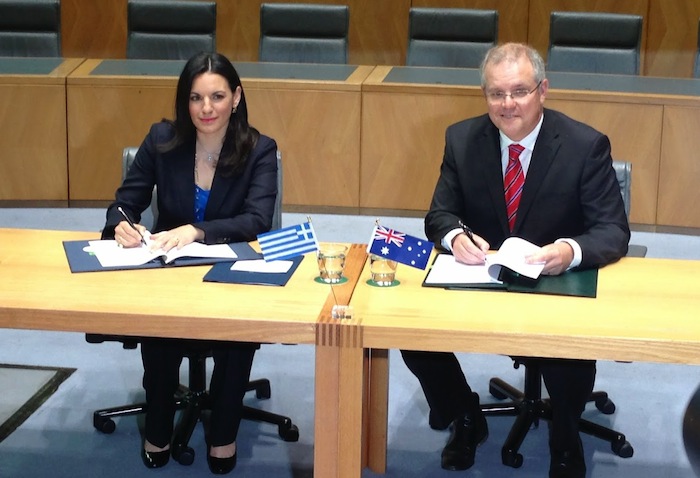 After two years of effort, Greece has finally signed the intergovernmental agreement with Australia to grant a combination of work and holiday visas to 500 individuals, aged 18-30 years old, in order to satisfy the request of the Greek Diaspora. The visas will allow people to work in Australia for one year.

According to the Greek Minister of Tourism, Olga Kefalogianni, the implementation of the agreement will be completed in a few months, after it has been ratified by the Greek Parliament.

The agreement was signed, on Greece’s behalf by Olga Kefalogianni and on Australia’s behalf by the country’s Minister for Immigration, Scott Morrison, at the Federal Parliament in Canberra.

The objective of this agreement is to strengthen ties and promote the mobility of young people between the two countries.

At first, the bilateral agreement will cover 500 young students aged 18-30, who will have the opportunity to make a trip to Australia or Greece, respectively, with permission to work on a pilot program.

According to the Minister for Immigration, Scott Morrison, if the program is successful, then it could be extended.

Meanwhile, the association of friends of the Greek Communist Party (KKE) denounced the signing of this agreement. “The truth behind these fine words is very different and bitter for workers,” stressed their statement, adding: “The signing of an agreement between Greece and Australia will not benefit anyone in regards to solving the unemployment problem. Especially when over 60% of young people in Greece are unemployed and close to 20% in Australia.”