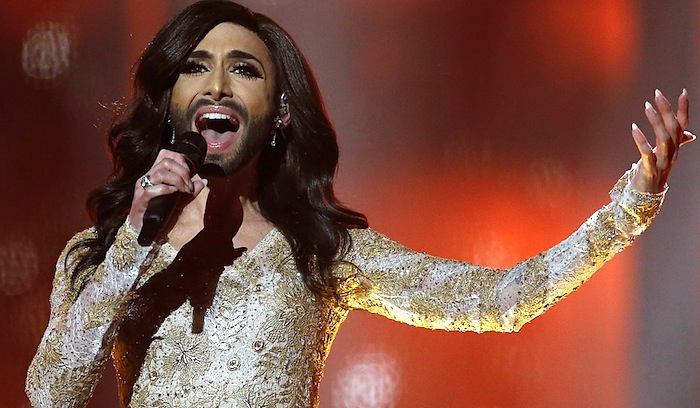 The winner of the 2014 Eurovision Song Contest is Conchita Wurst from Austria with the song “Rise Like A Phoenix.” The 25-year-old drag artist whose real name is Thomas “Tom” Neuwirth and on stage presents an image of a woman with a beard, won Europe’s largest song competition with 290 points. The Netherlands ended second (238 points) and Sweden came third with 218 points

After she was announced as the 2014 Eurovision winner, Conchita said:

“This night is dedicated to anyone who believes in a future of peace and freedom. You know who you are. We are unity and we are unstoppable.”

The 25 year-old transvestite persona had been subjected to homophobic verbal attacks from Russia and other eastern Europe countries who labeled Eurovision a “hotbed of sodomy” as a result of Wurst’s entry.

“You know, I have a very thick skin. It’s just strange that a little facial hair causes that much excitement,” had said the singer commenting on the attacks.

“Hey, I’m just a singer in a fabulous dress, with great hair and a beard,” she said.

Greece participated in the competition with the song “Rise Up” by Freaky Fortune and RiskyKidd. Greece ended 20th with 45 points.
Watch Greece’s performance:

The Eurovision Song Contest took place at the B&W Hallerna in Copenhagen, Denmark on Saturday, May 10. The 26 participating countries competed with a three minute song each. The winner was announced after a continent-wide phone vote.

The Eurovision Song Contest has been running every year since 1956. Organized by the European Broadcasting Union, last year’s Contest gathered worldwide viewing figures in excess of 180 million viewers.

After Conchita’s win, Austria will be the country to host the Song Contest in 2015.