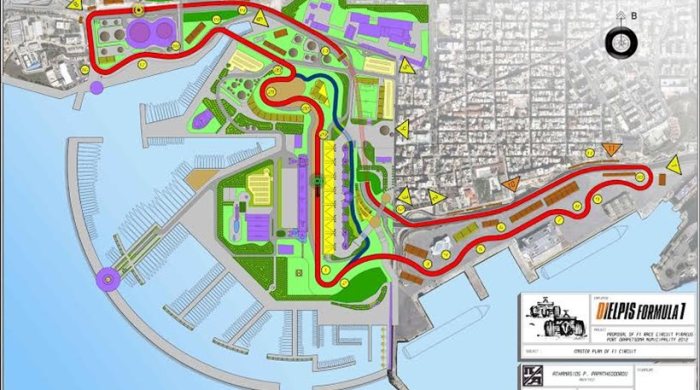 Greece’s Prime Minister, Antonis Samaras, has written to Loukas Tzanis, mayor of Keratsini-Drapetsona, supporting the building of a Formula 1 racetrack, saying the project would kick-start economic activity in the region.
The project will be funded by private investors, Samaras noted. “We wait the relative study of the mutual ministry committee of strategic investment in order for the project to proceed further,” he concluded.
The idea came two years ago to the architect Athanasios Papatheodorou, and his project will be built on the derelict site of a disused fertilizer factory.
Papatheodorou’s project is called Themistocles Circuit after the name of Athenian statesman and founder of Athenian sea power by equipping the ports of Piraeus and building the classic battleships of the time – triremes. “24 months after the first presentation of the idea, I can say that we have established a lot of contacts both in Greece and abroad. On the other hand, we are again at the starting point. What needs to happen is for a council to be formed involving the seven competent ministers, headed by the Prime Minister. Otherwise, we will continue to organize meetings, to lose time and money without any result. I want to emphasize that Bernie Ecclestone will not wait for us forever. He is positive but this cannot last for years. We must act quickly,” states the architect, in conclusion.