Magnificent Byzantine Churches in the Heart of Athens 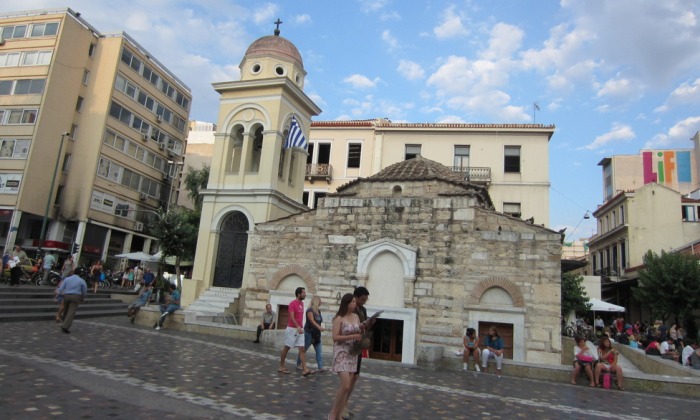 A tour of the Byzantine churches in the historic centre of Athens offers history, unique architecture, a rare viewing experience and a knowledge boost. Not only have they survived but many churches are still open for spiritual business and tourists alike, and doing a roaring trade.
These are treasures, “God-inspired art, a legacy of centuries” in the ancient Agora, Monastiraki, Plaka and Anafiotika in Athens, as the Archbishop of Athens refers to them.
We are talking of the following churches:
The church of Chrysospiliotissa was founded in 1863. In the past on the same spot stood a medium-sized basilical church that was largely ruined during the Revolution. After the Greek Liberation, parishioners roughly repaired it and gradually bought the adjoining plots seeking to rebuild it on the same spot.
The Byzantine church of Agios Nikolaos Ragavas is located in Anafiotika, close to the monument of Lysikrates and it is estimated that its name derives from the legendary family of Constantinople that spawned the Byzantine Emperor Michael I Rangabe. The first temple was built in the 9th century but it was destroyed by an unknown cause. The second was built in the 11th century and took its present form after maintenance works in 1979-1980.
The Pantanassa, the Church of the Assumption of the Blessed Virgin in Monastiraki is one of the oldest but also the least known temples of Athens. It is located at the Monastiraki square and gave its name to the whole area, since monastiraki in Greek means a small monastery.
The Agios Philippos Church is also at Monastiraki. At the place where today the third in a row church is built, Saint Philippos miraculously encountered the High Priest of the Jew Ananias.