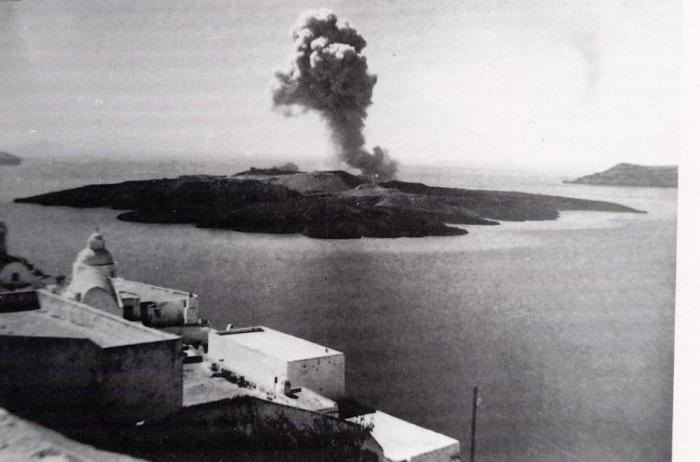 According to a recent international study, the volcano of the island Santorini, Greece, erupted in the 16th century BC and not earlier. The survey characterized a number of research studies that took place in the past and have indicated that Santorini’s volcano may have erupted a century earlier, as unreliable because the method based on tree-ring measurements that they used, could not provide them with accurate results.
An international team of researchers led by Paolo Cherubini from the Swiss Federal Institute for Forest, Snow and Landscape Research (WSL) has demonstrated in the scientific journal Antiquity, that this method cannot provide reliable results. The scientists show that the14C dating of individual pieces of olive wood enveloped by volcanic ash is too unreliable for precise dating.
“Investigating such wood samples only makes sense if it can be clearly shown that the trees were still alive at the time of the eruption. In the case of old olive trees in the Mediterranean region, it is not at all unusual for dead branches to stay in place for several decades,” says Paolo Cherubini. If 14C dating is carried out, it must use an international reference curve, which in the case of the period of the volcanic eruption is based on tree-ring measurements from trees that are more than 4,000 years old.
According to Cherubini, the uncertainties mentioned above can easily give rise to differences of several decades in the dating of Santorini’s eruption. Therefore, he believes that the hypothesis that Santorini’s volcano erupted almost a century earlier cannot be confirmed using current methods. In his opinion, answers are more likely to be found through interdisciplinary research involving close cooperation between archaeologists, climatologists, geoscientists, dendroclimatologists and historians, allowing a general view of the situation to emerge.
The question whether this natural disaster occurred 3,500 or 3,600 years ago is of great historiographical importance and has indeed at times been the subject of heated discussion among experts. The traditional belief that the volcano erupted during the 16th century BC, seems to be confirmed by this new study.