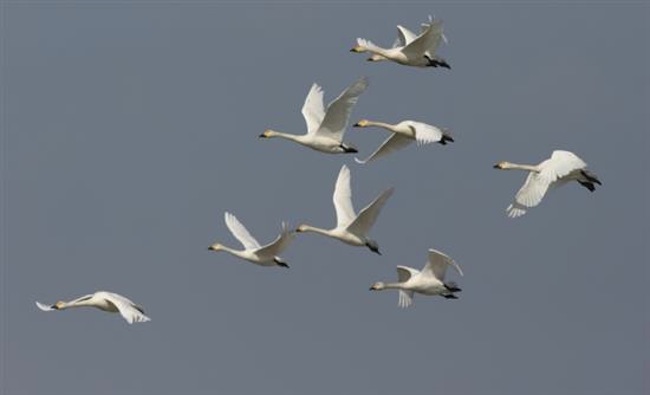 During the last few days, Greek conservationists in the area of Evros Delta, northern Greece have recorded a large number of tundra swans, specifically of the Bewick’s Swan subspecies.
According to Panagiotis Ioannidis, environmental chief of the agency for managing the protected wetland, this year the number of tundra swans amounts to 2,610, while in 201o their population reached 2,250,  the highest number ever recorded in Greece.
As Ioannidis reported to the Athens-Macedonia News Agency on Tuesday, the mild weather in Greece in combination with below-average temperatures in other parts of Europe attracted the migratory swans to Evros on their way to the northern hemisphere before spring, when they will begin nesting.
The conservationist noted that the rise in the number of tundra swans cannot be fully explained. “We guess that weather conditions and cold winters in northern areas have forced the birds to look for more southern parts. Maybe that’s why they have chosen the Evros Delta as their number one winter destination,” he added.
The snowy white tundra swan breeds in the Arctic and migrates many miles to winter on North America’s Atlantic and Pacific coastlines, bays, and lakes. Their entire breeding season depends on the changes of the Arctic climate. An early freeze or a late spring may cause significant problems in their reproduction.