GRNews
GreekReporter.comGreek NewsEconomyDijsselbloem: More Aid for Greece to Be Decided 'After Summer'

Dijsselbloem: More Aid for Greece to Be Decided 'After Summer' 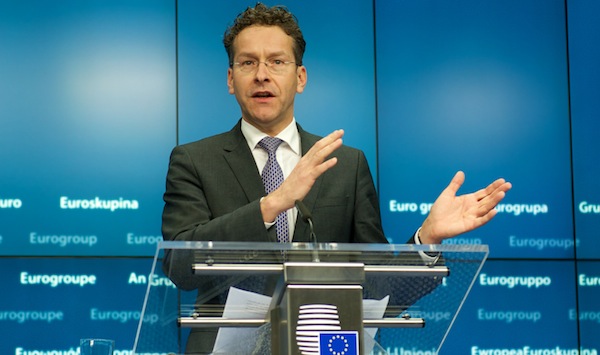 Jeroen Dijsselbloem has said there is no need to discuss debt relief for Greece until August, with German Finance Minister Wolfgang Schaeuble suggesting that the summer will be the time to also discuss a possible third bailout.
Eurogroup chief Dijsselbloem said Monday that the International Monetary Fund, which co-funds the Greek bailout alongside the euro zone, was “on board” with that timetable. Delaying the decision until after the summer would make it easier for European politicians to sidestep the divisive issue of how to deal with Greece’s financing needs and massive debt in the lead-up to elections for the European Parliament in late May.
“There’s no reason to rush on the basis of the Eurostat figures, which will only come out at the end of April. In August, we’ll talk about the future,” he added.
Dijsselbloem’s remarks put an end to speculation that international creditors might agree to some form of debt relief before the European Parliament elections in May to boost Greece’s governing pro-reform camp against its more euro-sceptic opponents.
The date when troika inspectors will return to Athens is due to be agreed at the Brussels meeting and Schaueble indicated that tying up the loose ends from the adjustment program must be a priority for the Greek government.