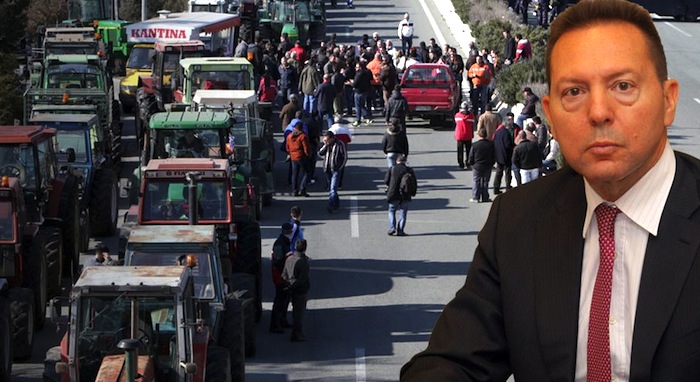 Greek farmers around the country held various protests on Thursday after talks between their representatives and Finance Minister Yannis Stournaras broke down earlier the same day. Farmer groups from various areas left the meeting with the minister saying there had been no result and warning that protest action will escalate.
The farmers gathered at the critical Nikaia roadblock in central Greece — just off the main north-south national highway linking Athens and the country’s second-largest city Thessaloniki — are to hold a general meeting on Friday to decide what their next action will be.
Earlier, they had blocked traffic on the national highway near Larissa for two hours before departing. A little further down, their colleagues in Lamia had also blocked the road for roughly half an hour before departing, with traffic restored just before 2 p.m. “We have no aim to inconvenience citizens but we have no other way to talk to the government and tell them what we are up against,” the All-Fthiotida farmers’ association president said, adding that similar action will be taken in the future.
As part of the protest, farmers in Lamia poured milk and farm produce on the road. Protests were also held on the Patras-Corinth national highway linking Athens with the west, where farmers occupied the Rio road toll booths and let cars through free of charge, and in Pella where they occupied a public building in Edessa. Meanwhile, services at the Eastern Macedonia-Thrace Region headquarters will be closed on Monday in solidarity with farmer protests scheduled to take place on Monday afternoon in the region.
Farmers are demanding that the government withdraw new measures for the taxation of farming incomes and are especially incensed by a requirement that they keep books of accounts, similar to other businesses, saying that this is inapplicable on a farm. Other demands relate to high prices for fuel and electricity that push their costs up.
(source: ana-mpa)