Bild: Greeks Richer than the Germans 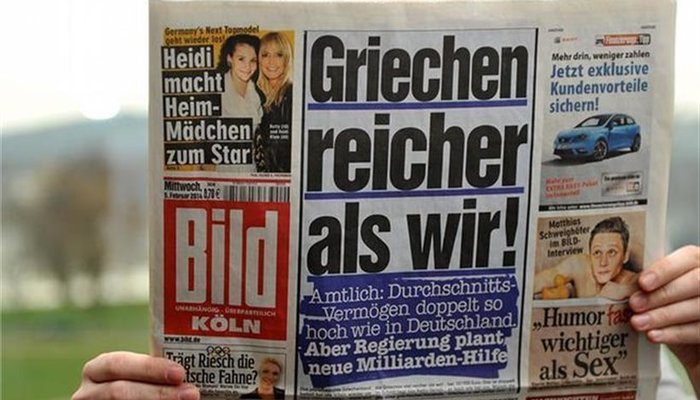 An article was published in the German newspaper Bild entitled “The Greeks are richer than us,” in which a journalist justifies his opinion explaining various reasons of how he has developed this opinion.

“The figures are official. The average wealth of Greeks is double that of the Germans. However, Greece is still on the verge of bankruptcy and is asking for a 20 billion euro aid package from EU countries. Among them is Germany, from which 6 billion euros will be granted. This cannot be happening. The average Greek household has more than 101,900 euros, according to the European Central Bank (ECB), when the average German household only has 52,000 euros,” the journalist said.

According to Bild, Greek wealth can be explained with four main reasons.

The first reason is the tax system in Greece. “They pay lower tax. A mid-employee three years ago used to pay 18.8 percent tax and social contribution, while a German 39.2 percent. The Greek government has increased the taxes since the crisis outbreak but the tax evasion issue hasn’t been resolved yet,” the article stresses.

The second reason according to the German journalist is that the Greeks own many properties. “72 percent of Greeks own an apartment or an entire building when in Germany this rate is only 44 percent.”

Furthermore, Greeks have been receiving higher pensions. A Greek pensioner gets 110 percent of his average annual salary, while in Germany a pensioner gets only 58 percent. The Greeks had also, until recently, been able to retire after 35-37 years of work and receive a full pension, when in Germany retirement is after 45 years of work, as it was proven in a survey conducted by the Organisation for Economic Co-operation and Development (OECD).

Last but not least is tax evasion. “Until recently many Greeks had been managing to not pay the 23 percent VAT on their purchases and in restaurants. Moreover, tax evasion among lawyers, doctors and freelancers rose to 29 billion euros per year. The Greek government is trying to address tax evasion, however the audits stop at 10pm” the journalist concludes.