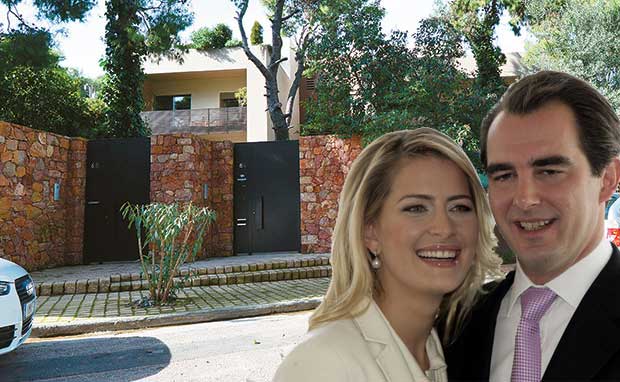 In the case of the former Greek royal family or Glücksburgs, as they are known, history seems to be repeating itself, at least with some similarities. The son of the former Greek King Constantine II has rented a property on the boundaries of the historic compound belonging to the Papandreou family. From now on, it seems that the representatives of the Greek monarchy will share a wall to the representatives of the modern Greek parliamentary republic.
The estate at Kastri, a wealthy northern suburb of Athens, was once home to “the old man of democracy,” PM Georgios Papandreou, and decision center for the modern political history of Greece, while becoming witness to live changing political events, including the first abolition of monarchy in the 1960’s. Now, this historic compound is set to host the son of former Greek King Constantine II, Prince Nikolaos, and his wife, Tatiana Blatnik.
In this estate, many important decisions were made concerning the future of Greece, while during the military junta, the former PM was exiled to this location. The later-on recent Greek PM, George Papandreou, grandson of Georgios Papandreou, as well as his brothers and sisters grew up in this house.
The couple is reported to be extremely happy about the new residence and have already moved to their new home, while huge moving vans have brought all their royal belongings. The estate belongs to the former Prime Minister’s sister, Sofia Papandreou.
The villa which bears the name “Galini” has been in the spotlight in recent years, as Sofia Papandreou has several times tried to erect luxury bungalows on the grounds of the family property, which would then be rented or sold. Her plans for exploiting her family’s name and raking in buckets of money have constantly failed due to the opposition of locals and the government.