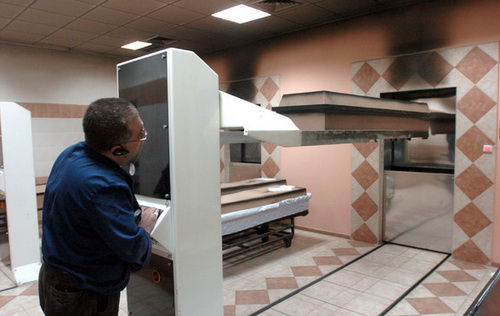 The first crematorium in Greece is planned for the city of Volos, Central Greece.
The legal framework allowing the creation of crematoria has already been unanimously passed by the Greek parliament, while the required joint ministerial decision and presidential decree have been also published. Though several organizations are still blocking the implementation of these, as highlighted by SYRIZA MP Nikos Voutsis, who put the issue before parliament.
“The matter becomes now primarily political. Although these units are of low disturbance, there are seen and unseen forces, which don’t allow the creation of a cremation center even in Attica,” added Voutsis.
“We have delayed the creation of cremation centers. The authorization for setting up crematoria has been in place since 2006, the presidential decree though was published three years later,” mentioned deputy interior minister Leonidas Grigorakos, and added, “Many municipalities which decide to open crematoria, then revoke their decision in the municipal councils.” The creation and maintenance of such sites is the sole responsibility of the local authorities, explained the minister.
The municipality of Volos seems to be an exception. As Grigorakos said, a presidential decree for the Volos crematorium is currently being drafted, because the will is there and all the guarantees have been given, while all the procedures have been carried out in accordance with the law.
In the region of Attica, over the past few years many municipalities have launched similar projects, though in most cases their impact on the environment had put a hold on the applications.
The main opponent to the opening of crematoria in Greece is the Greek Orthodox Church, which does not permit the burning of corpses, as it is held to be against the rules of Christianity. Those families who choose to have the corpse cremated are currently forced to ship the remains of their loved one out of Greece.

The breathtaking village of Theodoriana, nestled in the Tzoumerka mountain range in Greece, looks like something out of a fairy tale.
Charity

The Penelopean Daycare in Athens has taken care of some of the most disadvantaged children in the Greek capital for decades.
Greek News