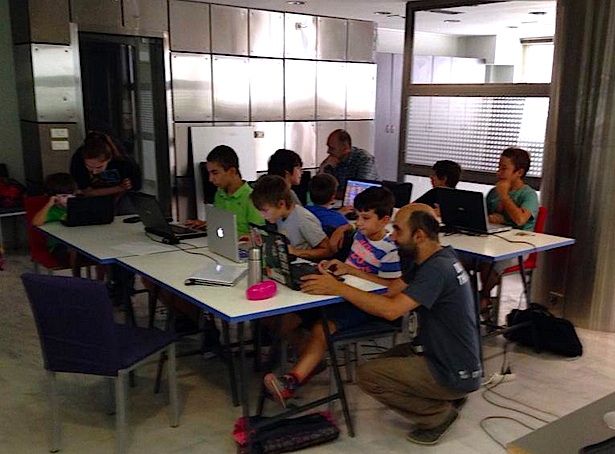 The first Greek CoderDojo is organized in Athens, Greece and is hosted by “The Cube Athens.” After Dublin and Google’s headquarters, the global initiative that aims to teach computer programming and technology to young children arriving in Athens, Greece.

CoderDojo is a global network organizing and supporting non-profit Coding Clubs for young people and children. Through a series of creative, pleasant and innovative courses by volunteers, children learn to write computer codes and programs, create websites, mobile and tablet applications, games and much more.
The idea: CoderDojo was founded in 2011 by James Whelton and Bill Liao, when James became popular as the iPod Nano hacker and created a programming club in his school. Then, he met the entrepreneur Bill Liao who liked the idea and decided to develop Whelton’s club. In June 2011 the first CoderDojo took place in Ireland with such huge success, that it progressed to become global soon after.
How it works: A volunteer teaches and assists young programmers and at end of the program, students will have created a program that they will present to their parents and teachers. During the workshops children learn basic programming principles using the MIT computer language Scratch and Kodu programming tool by Microsoft.
Dojos are organized, implemented and taught by volunteers. They also organize educational visits to IT and technology companies and invite professionals to talk about their career and their daily schedule.
Where and when: CoderDojos will take place every first and third weekend of the month at “The Cube Athens” in Greek and English.
Age: For now CoderDojos are suitable for children between 8 to 12 years old. In the future, Dojos for older children will also be organized.
Course length: Each course lasts three hours and a few hours are required for homework.
Participation fee: There is no participation fee.
Participation procedure: Just send your email along with basic personal information for you and your child and the CoderDojo Athens team will organize the rest.
Why it’s perfect for your child: Your child has the opportunity to acquire additional skills and adopt a different way of thinking through a pleasant program. Instructors and parents help children to develop their skills and to adapt from a very young age, to the world of computers and internet in order to become responsible users in the future.
(Edited by Evgenia Adamantopoulou)