TechNews
GreekReporter.com Greece Tsipras: 'It is Certain that we Will be the Next Government of...

Tsipras: 'It is Certain that we Will be the Next Government of Greece' 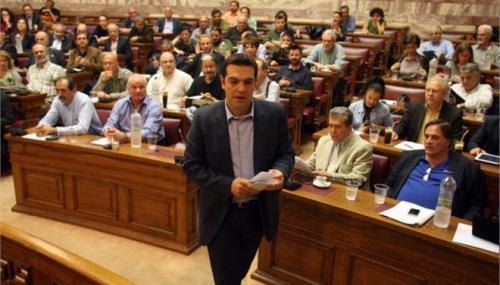 The president of the major opposition party, Alexis Tsipras, while addressing the plenary session of the parliamentary group of SYRIZA earlier today, underlined that his party is strongly against the policies that the Memorandum imposes on Greek society. Furthermore, he warned troika that his party will not countersign any new Memorandum. He quoted “You must search elsewhere for an accomplice to your crime against the Greek society.” Moreover, he said that “the cynical but nonetheless sincere admittance by troika, that the policy of the memorandum followed and imposed by the Greek coalition government, was full of omissions, is the best way to prove that our word is true.”
Meanwhile, he highlighted that the Greek Prime Minister, Antonis Samaras “could not cope with the difficulties and correspond to the demands of the Greek people. Mr. Samaras not only failed to admit that the policy his government follows is wrong, but he did not even find the courage to say something about it.”
In addition, the president of SYRIZA’s parliamentary group expressed his certainty that his party will soon come to power. “The Greek government is collapsing day by day. On the contrary the time is right for us to come to power. Within 2014, SYRIZA will be Greece’s next government. This is more than a certainty. We are all aware how difficult our task is and how much greater the responsibilities now are, but our party is more than capable of being successful. We are committed to the Greek people.”
He did not however, forget to criticize the behavior of some of the party’s MPs — Petros Tatsopoulos and Vasilis Diamantopoulos — by saying that “these behaviors have no place and are not consistent to the principles of the Left.” He made it crystal clear that such behaviors will no longer be tolerated.
Alexis Tsipras also made a reference to the Hellenic Postbank scandal by quoting that this is only the “tip of the iceberg.”
Last but not least, Tsipras stated that SYRIZA’s priority is to reconstruct an effective welfare state.