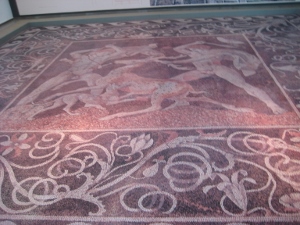 “We place leaves of Mastiha in our food,” said John Erdemir, a New York City resident who emigrated from Ankara, Turkey. “On the Asian coast close to Izmir (Tralleis in Greek) and Datca (district on a peninsula near Kos), Cesme (Tseme in Greek, opposite the island of Chios), there are mastiha trees. Few know that mastiha grows there, only the locals and they know how to keep it to themselves. They never mention it to people from Ankara.”

This statement conjured up many memories and prompted my own research. In my childhood in Astoria, I was surrounded by Chian/Micrasiates (from the coast of Greek Asia Minor) who adored anise, mastiha and mastiha ouzo. “Chios’ mastiha and ouzo is the best,” said my late grandmother, Despina Gagas Pappas (Papantonakis). “Mastiha tastes great in koulourakia. Add it. We must treasure our mastiha. Save it.” Thus began my preoccupation with saving 1950’s mastiha the way one saves gold coins. We actually used a hammer to grind it to a powder in later years.

I saw mastiha production first hand in 1971 during my first visit to Chios as a teacher/graduate student. “Mastiha is only grown in Chios,” said the Greek islanders. I had not traveled to Tseme by that time. In June 2007, I took an exciting tour to Tseme with Sunrise Tours of Chios, arranged by Argyro, a unique administrator. All along the coast of Cesme I noticed mastic trees dotting the landscape. How could this be? Mastic only grows in Chios!

During the devastating fires of August 2012, which so damaged the Mastic trees, Despina Siolas, MD/Ph.D., traveled the same tour to Izmir, again arranged by Argyro of Sunrise Tours. “Mastic trees are all around the countryside,” she said. “When we returned to Chios, the mastic fires began. Our excursion continued despite the crisis. We actually had coffee frappes at a country tavern with fire fighters; they looked like professional wrestlers. The islanders went about their work a usual with a calmness that was exemplary.”
Knowing of my love for mastiha, Despina bought some back for my baking. We were all concerned about a decline of mastiha in America, but thankfully that never happened.

ANA-MPA, The Athens-Macedonian News Agency, reported on November 22, 2013, “There are encouraging signs that production of mastiha – the mastic gum that is a signature product of the Aegean island of Chios – may recover after a destructive fire in 2012 that destroyed 25 percent of the island’s yield. According to a North Aegean regional authority official, many trees that were considered dead have begun to blossom again and large numbers of new trees have already been planted. This encouraging news was announced during a press conference at the 29th International Tourism Exhibition “Philoxenia” in Thessaloniki, at a North Aegean region pavilion promoting tourism on the nine islands and their potential as holiday destinations,”

Ironically, it was a Turkish-American who told me that Mastic trees can grow outside of Chios, a fact which I refused to believe and which destroyed my lifetime of mastiha memories! According to Mr. Erdemir, a man who loves dancing rebetica in Laterna, a Greek tavern in Bayside, New York, “They sell mastic to tourists visiting the Western Anatolian coast.” My own research on the internet has revealed mastic’s Mediterranean character.

Pistacia lentiscus is native throughout the Mediterranean region, from Morocco and the Iberian peninsula in the west, through southern France and Turkey to Iraq and Iran in the east. It is also native to the Canary Islands. The word mastic derives either from the Greek verb mastichein (“to gnash the teeth”, origin of the English word masticate) or massein (“to chew”). 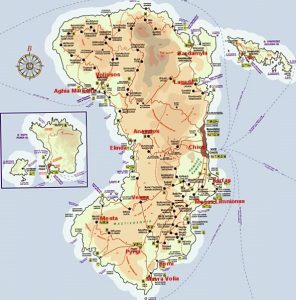 Within the European Union, mastic production in Chios has been granted protected designation of origin (PDO) and protected geographical indication (PGI) status. Both have been granted because, although the tree is native to the entire Mediterranean region, only the mastic trees of southern Chios “weep” the mastiha resin when their bark is scored. The island’s mastic production is controlled by a co-operative of medieval villages, collectively known as the ‘Mastichochoria,’ which are also located in the southern part of Chios. There is even a small Museum of Mastic in the village of Pyrgi ( http://en.wikipedia.org/wiki/Pistacia_lentiscus).

Traditionally there has also been limited production of mastic on the Çeşme peninsula on the Turkish coast, only eight nautical miles from Chios, with similar conditions suitable for mastic production. The Turkish Foundation for Combating Soil Erosion, for Reforestation and the Protection of Natural Habitats TEMA has been leading a project to protect the native mastic trees and to plant new ones on the peninsula, in order to revive commercial production. As part of this project, which is expected to last through 2016, over 3,000 mastic tree saplings were planted between 2008 and October 2011, covering 368 acres (149 hectares) of dedicated farm land provided by the Izmir Institute of Technology (http://en.wikipedia.org/wiki/Mastic_(plant_resin).

Dr. Marianna Hagidimitriou, Assistant Professor of the Agricultural University of Athens, said “fossils of mastic tree leaves found on the island reveal its existence six thousand years ago, suggesting that it originally came from this island. It is traded by the Chios Gum Mastic Growers Association that has 4,850 members. The Association was created in 1938 to help commercialize the product, to ensure the income of the growers, to develop new technology and to encourage new cultivation.” (http://www.unipa.it/arbor/varie/Presentation_M.Hagidimitriou_2.)

The Chians are exceptional business persons who have created a unique business. It does not make a difference whether it is grown in other regions. The mastiha industry was created by unique persons who saved their island’s economy through their resourcefulness. This is the treasure of the mastiha industry: persons dedicated to their agricultural inheritance. I will hand down an appreciation of Chios mastic to the next generation of family and friends. Visit the links for more information.