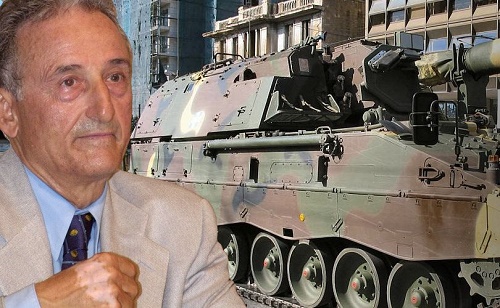 According to Greek news sources, police have arrested 78-year-old arms dealer Dimitris Papachristos, on charges of bribing Greek officials in order to receive lucrative arms contracts. He was a representative during the year 2000 of the German company Krauss-Maffei Wegmann (KMW). Furthermore, warrants have been issued for a number of other people also involved in the case.
The arrest follows testimony by Antonis Kantas, former Greek Deputy Director of Armaments between 1996-2002, in which it is alleged that in mid 2000, Papachristos paid him a 750,000-euro bribe in order to secure a contract for KMW to supply PzH 2000 self-propelled howitzers to Greece. The contract was signed in 2001, costing the Greek state 190.1 million euros.
In his defense, Kantas has alleged that KMW gave bribes in order to secure the contract, amounting to 9.5 million euros. However in the German newspaper Sueddeutsche Zeiting, KMW denies any wrongdoing.
In his testimony Kantas alleged that, “Early in 2002, when the contract was completed and about a semester later I was given UBP Zurich Bank forms in order to make an account. In this account Papachristos deposited about 500,000-euros in the name of his company OXYLOS, through Cyprus Popular Bank and another 50,000-euros in the name of a different company, GRAMON SERVICE. Furthermore, he deposited 100,000-euros in the DRESDNER BANK account that Mr. Lyginos had created for me (Mr. Lyginos is a Greek- Swiss employee of Dresdner Bank). I believe that the money came from OXYLOS. I was given another 100,000-euros by Papachristos in cash in my office in the center of Athens in Greece.”