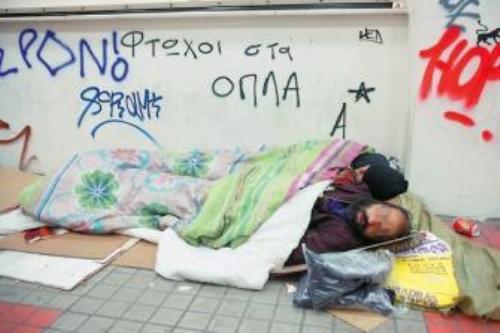 A study conducted by Athens University of Economics and Business along with the Associate Professor of the University, Manos Matsaganis, showed that the percentage of Greeks that live in poverty has increased significantly. Some 14 percent of the Greek population lives in poverty for the year 2013, whereas in 2009 the percentage of those who lived in poverty was 2 percent of the country’s population.
Victims of this situation amount to 630,000 people who are unemployed and some 455,000 Greek households in which none of their members have a job. The survey suggests that this situation of extreme poverty was not only a result of the deep and constant recession.  The lack in an effective social mechanism that would protect and support those who have a low-income is another important and determining factor that led in the outburst of poverty in Greece.
In particular, within the frame of the memorandum the money that the Greek state invests in social mechanisms are scarce and as a result there is not an efficient Welfare State that could help those that cannot make ends meet.
According to the survey’s data, 22 percent of the Greek population has an income below 60 percent of the national median disposable income. The thing that is most worrisome, is that 14 percent of the Greeks have such a low-income that they cannot even provide themselves with the basics as they live under a regime of extreme poverty.