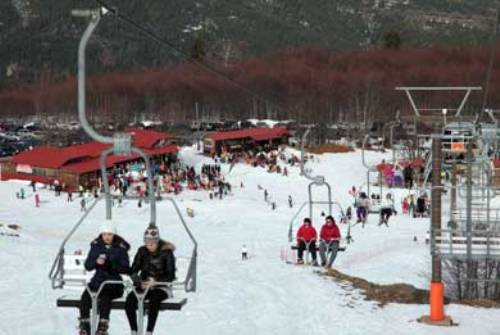 Most of the popular winter resorts in Greece still have vacancies. Occupancy rates currently stand at between 70 and 90 percent for New Year’s Day, although last-minute bookings are expected in the next few days.
As a result of the ongoing economic crisis in Greece, visitor numbers this holiday season have been down on those seen last year. Hoteliers are concerned by the reduction in both numbers and overall expenditure, particularly on food. Some resorts have also reported a reduction in the length of stays.
In Kalavryta, occupancy rates are around 90 percent for New Year’s Eve. In Patra, in an attempt to increase visitor numbers and  to attract families, hoteliers and restaurant owners are offering free accommodation and meals for children under 14 years-of-age.
Giorgos Zarifis, head of the Magnisia Hoteliers Association stated, “Visitors are looking for last minute opportunities for bookings in Pilio in Central Greece.” He added that the average price for a twin room is approximately 70 euros per night.
At Pieria the occupancy rate is just 55 percent, while a few kilometers away at the foot of Mount Olympus it is 90 percent.
In the northern Peloponnese at Trikala Corinthias, hoteliers report bookings up to almost 100 percent of capacity, although visitors appear to be cutting back on food, according to Nikos Theodoratos of the local professionals association.
In Florina in western Macedonia, the average occupancy rate is just 35 percent, although bookings are expected to increase after January 2.