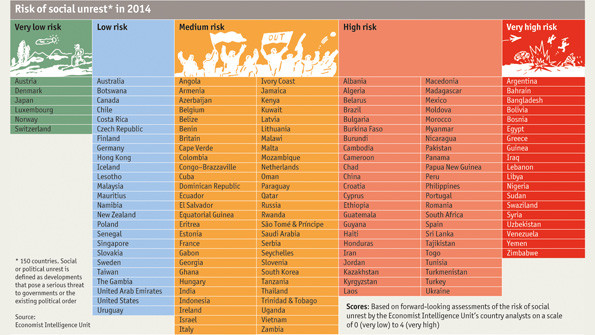 The Economist included Greece in its list of countries with high risk of social unrest during the year 2014. Other countries included were Egypt, Bahrain, Libya, Syria and Nigeria. Greece was the only European Union country among the nineteen others that are part of the list of countries with high risk of demonstrations and social unrest during the year 2014.
Overall, 65 countries (45%) out of a total of 150 appear to be under high risk or extremely high risk status.
According to the Economist, even though the economic downturn is usually the main reason for the eruption of demonstrations, this time it is not the only one.
“Declines in income and high unemployment are not always followed by unrest. Only when economic trouble is accompanied by other elements of vulnerability is there a high risk of instability. Such factors include wide income-inequality, poor government, low levels of social provision, ethnic tensions and a history of unrest.” the Economist article said.
It continues: “Of particular importance in sparking unrest in recent times, appears to have been an erosion of trust in governments and institutions: a crisis of democracy.”