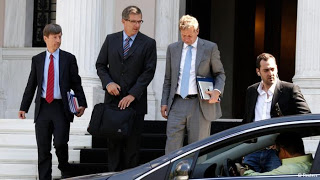 The European Commission confirmed late on Saturday that there will be no conclusion of the latest troika review of the Greek adjustment program this month.
Senior auditors from the so-called creditor troika — the EU, IMF and European Central Bank — had been expected to return to Athens on Monday to resume an evaluation of pledged Greek reforms.
Simon O’Connor, a spokesman for EU Economic Affairs Commissioner Olli Rehn said full negotiating teams would not return to Athens until January “after the authorities have made further progress in implementation” of reforms demanded by Greece’s creditors.
“We expect a full negotiating team to return to Athens in January, after the authorities have made further progress in implementation, with the objective of reaching a staff level agreement.” he said.
Discussions are reportedly stumbling on the issue of a new property tax, debtor property auctions, layoffs in the state sector and the slow pace of privatization.

A new border surveillance drone, which represents the next generation of unmanned surveillance aircraft, will be manufactured by a Greek firm.
Greece