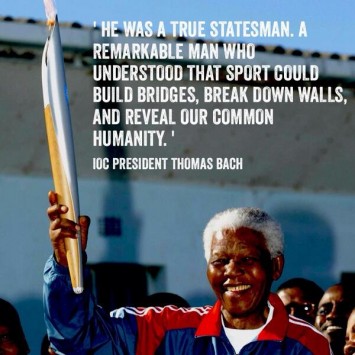 The International Olympic Committee, IOC on its official twitter account, said farewell to the former leader of South Africa, Nelson Mandela by uploading a photo.
The photo was “full” from Greece, as “Madiba” is depicted holding the torch of the Olympic Games of Athens.
“A remarkable man who understood that sport could build bridges, break down walls, and reveal our common humanity,” Thomas Bach, the president of IOC, said in the massage that accompanied the picture.
Greek Prime Minister, Antonis Samaras and the Vice President of the Coalition government Evangelos Venizelos made the following statements on the death of Nelson Mandela.
Antonis Samaras: “today, along with the entire world community, we salute the hero who wrote unique pages in its recent history, the symbol of the struggle for human decency, equality and freedom in a better and fairer world. The model of humility, selflessness and humanity, the ideologist fighter against violence, apartheid and all forms of racism. The Greek people will always honor his memory. I offer my sincerest condolences to Mandela’s family and to the people of South Africa.”
Venizelos: “Nelson Mandela had the privilege of entering the world’s history realm many years ago, as an emblematic figure of the international struggle against racism and xenophobia and as a symbol of the perpetual struggle for human decency, equality and freedom. All of humanity bids him farewell in an era when unfortunately, many conquests of the democratic political culture are being doubted. We hope his name and image are always a reference point with substantial institutional and social context.”