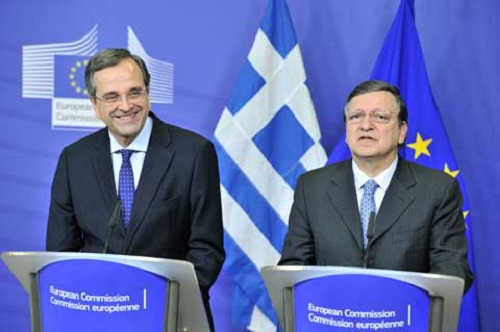 According to the Greek Prime Minister Antonis Samaras, the Greek European Union presidency would be one of “opportunities, not a presidency of crisis.” The priorities of the Greek presidency are job creation, monetary union, the fight against illegal immigration and Europe’s maritime policy.
A joint conference with the President of the European Commission Jose Manuel Barroso, took place on Wednesday, following a meeting between a Greek government delegation and the EU’s 28-member College of Commissioners. In addition, the Deputy Prime Minister Evangelos Venizelos and the Greek Minister of Finance Yannis Stournaras attended the meeting. The meeting was part of the preparation of Greece for the rotating presidency which begins on January 1.
The Greek Prime Minister said that “Greek people have made immense, incredible sacrifices to get us here.” He also added that if Greece wants to become more competitive, than the structural changes imposed by its lenders must be carried out. Furthermore, he said that he is optimistic that the negotiations with the Troika will come to a new agreement before the end of the year.
Barroso characterized the meeting as “constructive,” and said that he appreciates “the determination shown by the Greek citizens and authorities during this difficult time.” During his speech he said that Greece is in the last miles of its marathon and that the country’s six month leadership would also play a role in boosting trade.
According to Mr. Barroso, 2014 will be a crucial time for Europe since the key legislation will be finalized ahead of the European Parliament elections. He said that the priorities of the Greek presidency would allow EU members to “sail together for sustainable growth and job creation.” Adding that “Europe would not be Europe today without Greece.”