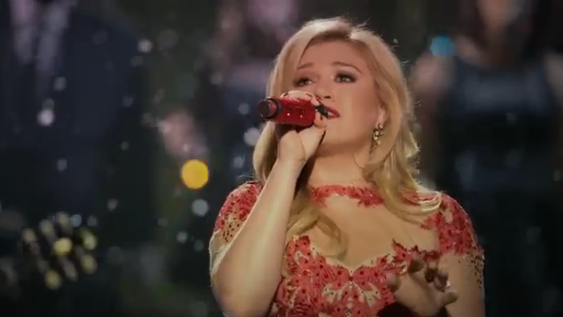 Newlywed and expectant mom Kelly Clarkson is getting in the holiday spirit with her own television special, “Kelly Clarkson’s Cautionary Christmas Music Tale.”

The 31-year-old pop singer, who is part Greek, taped a Christmas music special that airs Wednesday, Dec. 11 on NBC. The comedic story explains the meaning of Christmas, and Clarkson will be joined by country singers Trisha Yearwood, Blake Shelton, and Reba McEntire (who also happens to be her mother-in-law). Other celebrities making an appearance on the special include Robin Williams, Whoopi Goldberg, William Shatner, Jay Leno, Matt Lauer, Jai Rodriguez, Heidi Klum, and Ken Jeong.

Songs from Clarkson’s holiday album, Wrapped in Red, will also be sung during the program. A video for “Underneath the Tree” was just released, featuring footage from the special: