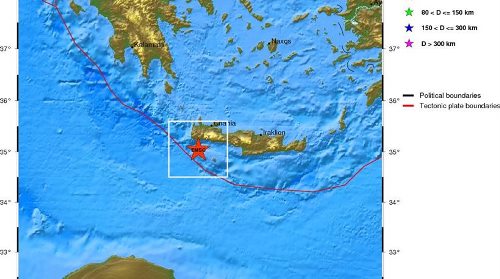 On Sunday morning in Crete, seismographs recorded two earthquakes simultaneously, in the south and west of the island, the biggest earthquake reaching up to 4.3 on the Richter scale. The first earthquake occurred in the southwest of Chania, with a depth of 55 kilometers and had a magnitude of 3.5 on the Richter.
According to the Greek Geodynamic Institute, the first quake, measuring 4.3, struck 139 kilometers south of Ierapetra in Lasithi on the eastern tip of the island at 5.28 a.m., at 6.05 a.m. a second tremor measuring 3.8 followed just a few kilometers off the epicenter of the previous quake.