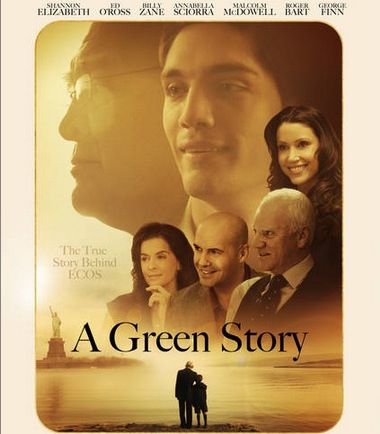 “A Green Story,” the movie about a Greek who comes to America as a poor immigrant and creates a green empire will hit stores in Greece next week. The movie will initially only be available for rent, and available for purchase in 2014.
“A Green Story” is based on Dr. Van Vlahakis’ life who left Greece as a young boy with 22 dollars in his pocket to arrive in America and create Earth Friendly Products, the largest green cleaning products manufacturer in the US.
Eftehios – as is his Greek name- not only managed to live the American dream for himself, but also created the leading privately owned company for environmentally friendly cleaning products. Think of Tide and Palmolive but way better for the environment.
Written and directed by Nika Agiashvili, it stars Ed O’Ross (“Full Metal Jacket”), Shannon Elizabeth (“American Pie”), Annabella Sciorra (“The Hand That Rocks the Cradle”), George Finn (“LOL”), Alexis georgoulis (“MyLife in Ruins”) Malcolm McDowell (“A Clockwork Orange”) and Billy Zane (“Titanic”). Agiashvili produced alongside John Edward Lee, Dimitri Birbilis, Deanna Plascencia and Chadwick Struck.
“It is a great honor and a source of inspiration to bring this fascinating Greek American dream to Greece,” said Irini Souganidou, the managing director of Feelgood Entertainment who holds the movie’s rights for Greece.
“More than ever, this is a time to share exemplary, true stories with the Greek audience,” she added.
Watch interviews with the real-life characters of “A Green Story.”