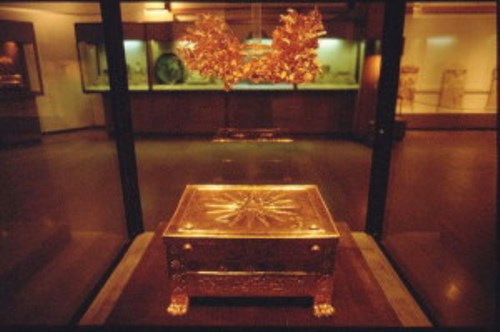 Ancient Macedonia will be revived through an exhibition which will take place at the European Parliament in Brussels for a few days.

“Arts and crafts in Greek antiquity: Selected finds from a royal necropolis in Northern Greece” is the title of the exhibition with photographs of the findings and the history of Royal Tombs of Vergina. This exhibition is organized by Chrysoula Paliadeli–Pasok MP–who is professor of Archaeology at Aristotle University.

The pictures show the palace, theater, market and cemetery of the ancient city as well as  illustrations of sculpture, miniature, tombstones, jewelery, weapons and pottery urns. All these, are reflecting the utmost importance of the history and culture of ancient Macedonians, and a crucial contribution to the Aristotle University of Thessaloniki excavation procedure.

The exhibition through these photographs also honors the people of the academic society who contributed to archaeology through their important findings connected to ancient Macedonia. In 1937, Professor Constantine Roman took the initiative to start an excavation, and in 1977 Professor Manolis Andronikos highlighted the importance of the archaeological site of Vergina.

Vergina is an exceptional testimony to a significant development in European civilization, at the transition from the classical city-state to the imperial structure of the Hellenistic and Roman periods. In particular, this is demonstrated by the remarkable series of royal tombs and their rich contents. The paintings found at Vergina are of extraordinarily high quality and historical importance.