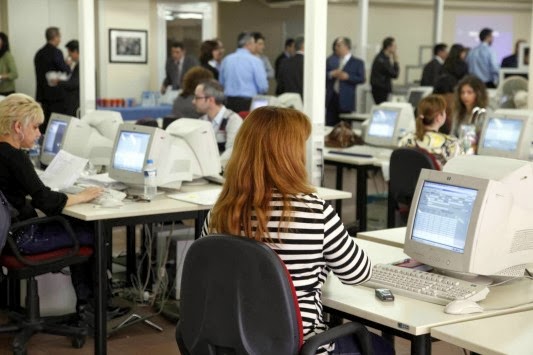 Greece’s hopes for a swift resolution to a disagreement over the extent and acceleration of reforms in return for continued rescue aid have been dimmed by a tough stance taken by international lenders who are squeezing the government to pick up the pace and as they remain far apart on the size of a looming hole in the 2014 budget.
Envoys from the Troika of the European Union-International Monetary Fund-European Central Bank (EU-IMF-ECB) are in Athens meeting with government officials and are scheduled to sit down with Administrative Reform Minister Kyriakos Mitsotakis on Nov. 8. He is charged with reducing the workforce by 25,000 over the next two years but that too has been delayed.
The Troika team is led by the IMF’s Poul Thomsen, the EU’s Matthias Mors and Klaus Masuch from the ECB. On the table this week is a stalled plan to unify property tax bills and fold in a surcharge imposed in 2011 that was supposed to be for one year but now will be permanent, as well as talks over the lender’s insistence the government start foreclosing on homes of people who can’t afford to pay banks because of big pay cuts, tax hikes and slashed pensions.
Prime Minister Antonis Samaras, the New Democracy Conservative leader, and his coalition partner, Deputy Prime Minister/Foreign Minister/PASOK Socialist leader Evangelos Venizelos ruled out more austerity measures but Thomsen said on Greek TV that they eventually will give and do it anyway.
The pressure on the government picked up after a Nov. 5 meeting with Minister of Labor Yannis Vroutsis, where the Troika envoys said they didn’t believe the government’s estimate of the looming budget gap which the lenders put at 2.5 billion euros, five times greater than what Athens projected.
The Troika is again pushing for the government to go after tax cheats who largely continue to escape but also want employer contributions to the social security system reduced to help business although that will create a new one-billion euro deficit.
Samaras is eager to avoid social unrest that could come if the government allows banks to go after homeowners who can’t pay their mortgages.  New Democracy and PASOK owe banks – who are dependent on the government for 50 billion euros in recapitalization funds – more than 250 million euros but aren’t paying, didn’t have to put up collateral and have given immunity to bank officers who gave them the money.
The Troika wants to target all homeowners, including those with great assets and huge bank accounts who hide behind various provisions to avoid taxes. The Troika will also insist on fully deregulating business leases, with the Ministry wanting to secure old leases and protect new ones for three to six years.
Mitsotakis will try to explain why the government has failed to complete a first wave of 12,500 suspensions on time yet will still ask for more time to complete a second, which was supposed to have been done by the end of next month.
The Troika will also reportedly demand explanations for big delays in dismissals, with the government having to dismiss a total of 4,000 by Christmas. The Troika representatives have recognized only 2,000 of the 2,600 dismissals the Minister claims, rejecting the inclusion of former national ERT employees and those dismissed on misconduct charges.