TechNews
GreekReporter.com Europe Europe’s Most Romantic Hotel is in Santorini

Europe’s Most Romantic Hotel is in Santorini 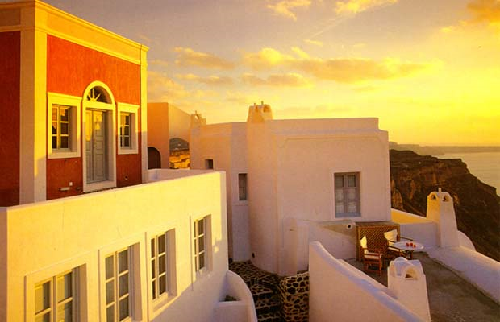 There is a hotel in Fira, the modern capital of the Greek Aegean island of Santorini, which came first among 600 historic hotels in Europe.

This hotel is no other than Aigialos Hotel in Fira Town of Santorini, in the Cyclades Islands, which was among the winners of the Historic Hotels of Europe Awards 2014, competing with 600 other famous hotels throughout Europe.

This Santorini hotel won the title “Most Romantic Historic Hotel of Europe” and the first place in visitors’ preference.

The award ceremony took place in the historic American Hotel in Amsterdam, Netherlands, and the award attributed to Aigialos Hotel of Santorini Island, sent a message of the potential and uniqueness of Greece and its tourism sector.

Historic Hotels of Europe described Aigialos Hotel with the following words: Fully renovated in 2009 by master masons utilizing local volcanic stone, each house showcases traditional design that revives a world where sea captains ruled. Large private terraces set the stage for some of the island’s best views, while house interiors harmoniously blend old world antiques and furnishings. Yet amidst tradition, the 21st Century abounds in the form of a pool, poolside bar, counter swim unit, as well as a gourmet restaurant and bar. Charming cobbled pathways snake through the properties, while Fira’s nightlife and gourmet restaurants are just a leisurely stroll away.

“Aigialos provides the ideal setting for a romantic wedding in Santorini.” They added

One more distinction came for the Divani Apollon Palace in Athens, Greece, which was included in Agoda’s list with Europe’s best spas.