Schulz: Greece is a Country of Opportunities 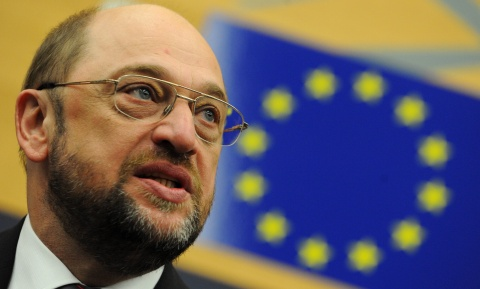 Martin Schulz came to Athens and spoke at the conference “South for Development” which was held at Athens Concert Hall. The President of the European Parliament since 2012 stated that Greece is the country of opportunities not the country of crisis, and the same is true about the rest of the countries of southern Europe.
EP President Martin Schulz, during his speech developed four proposals for dealing with the crisis:

Schulz referred to the killing of the two Golden Dawn members, saying that politically there is no reason to justify these kind of acts. However, he claimed that the people who vote for neo-Nazis are desperate.
He supported that the ideas of Jean-Marie Le Pen cannot solve the problem, as the European nations would not be stronger alone, as they would have to face bigger competition.
He expressed the view that investor confidence comes back to Europe, underlying that there was lack of confidence in Europe, but he stressed that the people of the Mediterranean are as clever as the people of northern Europe.
The event was organized by the EP office in Greece, in cooperation with the corresponding offices in other countries with fiscal problems in Europe.
The aim of the event was to promote the discussion on development in the European Union and especially in the countries mainly affected by the economic crisis.

Greek PM Kyriakos Mitsotakis stated on Wednesday that the country's national lockdown will continue due to a sharp increase in cases.
Europe