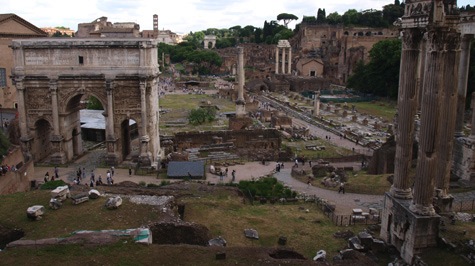 An exhibition focused on ancient cartography and the ways in which Greek and Roman societies perceived and represented both the known and unknown worlds opened at the Institute for the Study of the Ancient World (ISAW) at New York University.
Since no actual maps survive from antiquity, Measuring and Mapping Space: Geographic Knowledge in Greco-Roman Antiquity recreates and illuminates classical cartography by bringing together more than 40 carefully selected objects, including ancient artifacts decorated with geographic iconographies as well as Medieval and Renaissance manuscripts and printed books that draw upon ancient geographic treatises and maps. Together they provide a broad overview of Greco-Roman theories on the shape and size of the Earth, ancient methods of surveying lands, and the ways in which geography was used in Roman political propaganda. The exhibit runs through January 5, 2014.

ISAW Director Roger Bagnall states, “The show embodies one of ISAW’s main objectives, cross disciplinary approaches to antiquity. Our exhibitions and digital teams have come together to present a 21st century approach to the ancient mentality concerning geographic space and how it is represented.”
ISAW Exhibitions Director and Chief Curator Jennifer Chi states, “’Measuring and Mapping Space’ looks at ancient mapping beyond maps. Through the combination of ancient, medieval, and Renaissance sources and modern technologies, this innovative exhibition attempts to enter the minds of ancient Greeks and Romans telling the story of how they perceived the geographic space around them.”
Measuring and Mapping Space begins with the 13th-century Peutinger Map, displayed in a magnificent digital replica over 22 feet wide and 2 feet high. The map serves as a fitting introduction to the exhibit: it illustrates how mapping in antiquity was at once practical – it lists ports and landmarks to facilitate commercial and military sailing – and political – it represents the extent of the known world as if radiating from the center of Rome.

The exhibit then goes on to display some of the earliest efforts to measure longitude and latitude and to divide the world into climate zones. The practicalities of ancient mapping are illuminated through a collection of facsimiles of fifth-century-bce instruction manuals on land survey devoted to Roman techniques of dividing, measuring, and recording landholdings.
The exhibit also includes outstanding representations of Medieval and Renaissance maps that were based on ancient geographic treatises, with examples that include classical elements depicted through the prism of later centuries’ understanding of the world fused with Christian dogma. The subjectivity of geographic representations is further explored through a selection of coins that exemplify the imperial use of the globe for political propaganda during the Roman Empire.

The perceived proximity of mythical lands to the peripheries of both the Greek-speaking world and the Roman Empire influenced the way in which Greeks and Romans described the lands beyond their known worlds. Painted scenes on Greek vessels included in the exhibit, dating as early as 440 bce, show clear representations of creatures believed to live within these geographically unknown areas, such as griffins – hybrid mythical creatures with the features of both lions and eagles – and Arimaspians, legendary one-eyed people thought to live in the modern Carpathian Mountains.

Finally, “Measuring and Mapping Space” incorporates a multi-media room, providing a window into the ongoing work of Pleiades, a joint project of ISAW and the Ancient World Mapping Center at the University of North Carolina at Chapel Hill. Thanks to the development of Internet standards and commonly accepted “identifiers,” Pleiades enables the ongoing augmentation of maps that feature Greek, Roman, and Asian Near Eastern places by giving scholars and others from around the world the ability to contribute information. Mac terminals loaded with the browser-based API enable visitors to easily and dynamically view information about places as represented in ancient texts, artifacts, and images, as well as scholarly reconstructions and commentary.
(source: artdaily)