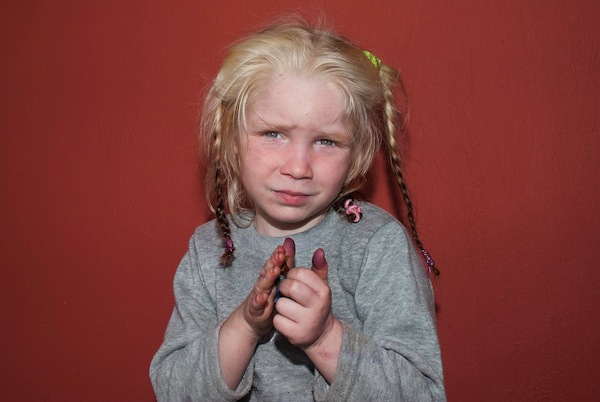 [latest update: 10/25/2013] The little blonde mystery girl was found at a Roma Camp in Farsala, Greece on October 16th during a random police investigation.

What we know until now:

According to the official Police announcement, during an operation in the ROMA camp in Farsala and during the lawful search in the house of two natives, a 39-year old man and a 40-year old woman, the police officers found out that a young girl of about 5 to 6 years old stayed with them.
The girl has white skin (fair complexion), blond hair and green eyes, features totally different from those of her alleged parents.
The two ROMA natives were taken to the Security Sub-directorate of Larissa and during their questioning by the competent police officers, they changed repeatedly their story about how they got the child; a fact that strengthened the conviction of the officers that the little girl was not the child of the above mentioned individuals.

DNA testing showed that there was not any genetic compatibility of heredity between the girl’s DNA data and those of the 39-year old man and the 40-year old woman.
In the progress of the investigations it emerged that the two ROMA natives in 2009, have taken the girl away from her biological parents under unknown till now circumstances. They have also managed to snatch from the Birth Registry of the Municipality of Athens the girl’s birth and christening certificate.
Three babies in five months
Moreover, it has been established that the 40-year old woman has two (2) valid Police Identity Cards that bear different data. She has, at the same time, two (2) different family registers / files, one at the Municipality of Larissa, where she has been registered as the mother of five (5) girls and of one (1) boy, and another one at the Municipality of Trikala, where she has been registered as the mother of four (4) girls.
It is to be emphasized that according to the above mentioned family registers, the 40-year old woman appears that in a 5-month time-period, from June till November 1993, had given birth to three (3) children, while in 3 ½ months, from October 1994 till February 1995, to three (3) more children. The 39-year old man has also a third family register at the Municipality of Farsala, where he is registered as the father of four (4) more children.
The two ROMA natives have managed to acquire a tax registration number under the personal data of the under-age girl.
The two ROMA in question have been arrested and a legal file was opened against them; it includes the crime of the abduction of a minor and the consecutive crime of the fraudulent misappropriation of a false certificate.
The Bulgarian mother scenario
A Relative of the arrested couple talking exclusively to the Greek TV show “Light in the Tunnel” and investigative journalist Angeliki Nikolouli claimed that Maria was sold to the Roma couple when she was just a few days-old by her biological mother, a Bulgarian woman living at the Sofades village in Northern Greece.
Couple from Thessaloniki Claiming Maria
A couple who lost their child at birth in 2009 has requested DNA tests believing that Maria might be their lost child. Doctors at a Thessaloniki hospital told them that their baby died at birth but when they asked for evidence they found out that the coffin’s baby was empty. Authorities are investigating the claim but the DNA results are not known yet.

Watch a video that was given to the Greek media showing 1-year-old Maria dancing:

Maria stays with ‘The Smile of the Child’

A psychologist from the General Police Division of Thessaly region has offered psychological support to the under-age girl. Moreover, by order of the competent Magistrates Court Prosecutorial Authorities, following a request submitted by the Security Sub-directorate of Larissa, the custody of the little girl was temporarily deprived from the two Roma and the girl was taken to the “SMILE OF THE CHILD” Association on 17/10/2013.