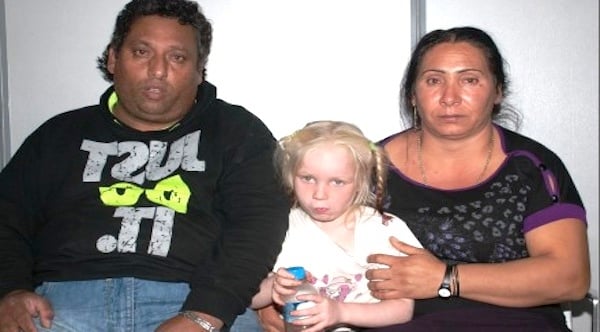 The Roma couple who acted as the parents of the little blonde girl who from recent dental exams is estimated to be 5 or 6 years-old, found in a Roma camp in Farsala on October 16th, are now in jail charged with abducting a minor.
The name of the two accused are 39 year-old Christos Salis, and 40-year-old Eleftheria Dimopoulou; both accused for kidnapping a child and stealing documents. According to latest information, the woman will be transferred to Korydallos Prison Complex in Piraeus, while the 39-year-old man will be detained at Larissa Prison in the Thessaly region of Greece.
The defense lawyers said that they respect the investigative process and the Code of Conduct, and do not intend to make any statements, they said that they respect the decision of Justice.
According to sources, the 39-year-old Salis stated in his apology, that when the Bulgarian Roma, and the biological mother of the little girl came to meet his family, he was away, when he came back two weeks later he found the child at the house.
In addition, he argued that he didn’t want to keep the child due to his criminal record, but his partner retorted that she already loved the girl so the child remained in the family.
The 39-year-old also asked to be released in order to meet the Bulgarian couple who, according to what he said, live in Greece. He even asked for the telephone restriction to be lifted for him and his partner, in order to identify the real parents of the child.
The pair from Farsala have different lawyers and two witnesses that say that the real parents of the child are Roma’s from Bulgaria, who live in Greece.
Today, a magistrate ordered both Christos Salis and Eleftheria Dimopoulou to be remanded in custody pending trial on charges of abducting a minor and forgery.
In addition, the Prosecutor’s mandated that the photos of the Roma couple be published in order to facilitate the tracking of the girl’s identity.