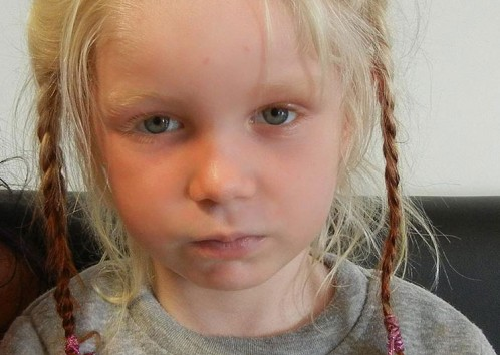 New evidence has been disclosed regarding the unbelievable story of the little girl who was kidnapped by a Roma couple in Farsala (Greece).
The Greek police have now shared the girl’s photographs publicly in hopes that someone will recognize her, and help find some answers as to where she comes from and who her parents are.
An anthropologist has been summoned to examine the girl in order to identify her place of origin by analyzing the structure of her bones.
The four-year old girl, whose name is Maria, does not speak (except for a few words and sounds), and is not as mature as an average girl of her age, and very attached to the roma woman who claims to be her mother.
In the beginning of the investigation, the 39-year-old man and the 40-year-old woman claimed to be her natural parents, but their features had nothing to do with the girl’s characteristics (blond hair, green eyes, light skin). Subsequently, a DNA test was performed, officially confirming what the police thought from the start- the child is not biologically theirs.
While being questioned by authorities, the couple answered, frequently contradicting themselves. They first stated that the girl was given to them for adoption by a woman who gave birth in the camp, then disappeared; then, the 40-year-old woman said that she found the baby outside a super market. Her next story was that the girl’s father is a Canadian man whom she had an affair with. In the end, she said that they had bought the little girl from a Bulgarian man.
It was finally proven that the couple had kidnapped the girl in 2009, right after she was born. According to official announcements from the police, the couple managed to not only take the girl from her natural parents, but they somehow managed to obtain her birth and baptism certificate from the Municipality of Athens birth department.
Although it is still unclear what exactly took place, the police assume that the child was initially set to be illegally adopted.
The psychologist of the General Police Directorate of Thessaly, has undertaken the psychological support of the child.
Meanwhile, the child has been taken from the Roma couple and currently under the safe care of the organization “The smile of the child”.
The national and international police investigations are still in progress, while Interpol is cooperating with Balkan countries in the effort to expand the investigation.