GRNews
GreekReporter.comGreek NewsEconomyEuropean Mobilization for the Repatriation of Parthenon Marbles

European Mobilization for the Repatriation of Parthenon Marbles 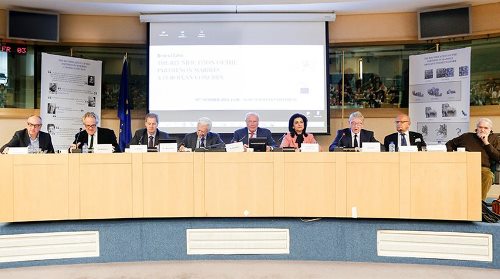 The ancient Greek marbles of Parthenon that are adorning the British Museum are of a major concern to the Greeks.

The story of stolen marbles is well-known. Lord Elgin the ambassador of England during the Ottoman Empire removed about half the Parthenon sculptures from 1801 until 1812, and then sold them to the British Museum in 1816.

The case of the return of the Parthenon Marbles, has emerged as a leading national demand, especially in the days of Greek Ambassador of Culture Melina Merkouri. Since then, there have been several efforts to return the marbles from England to Greece with poor results.

The inflexibility of the British government, the lack of organized international pressure, and lack of organization of the Greek governments haven’t solved this historical issue of high national and cultural importance.
However, this situation may change with the new effort of  the “Swiss Committee for the Restitution of the Parthenon Marbles” which is attempting to transform the issue from a bilateral problem between Greece and Britain to a major European cultural issue.

The Swiss Committee was established in 2008 by Dusan Sidjanski, President of the European Cultural Centre and special adviser to the President of the European commission, in aim to organize and spread knowledge at European and global level for the repatriation of the Marbles. Professor Sidjanski was born in Belgrade but he has spent his whole life since 1943 in Switzerland and he is a Swiss citizen. Additionally, he has received honorary Greek citizenship and a Greek European passport from the President of the Hellenic Republic whereas he loves Greek history, is married to a Greek, and speaks Greek fluently.

The conference stressed the need for a European initiative, so as to find a solution of mutual acceptance between Britain and Greece for the repatriation of the Marbles.

The idea of donating the Marbles from the British Museum to Acropolis Museum in exchange with other ancient Greek exhibits caused reactions. This idea is probably going to be the basis for finding a settlement for both countries, as well as a final resolution of a problem which concerns Greece for decades.

The main goal of Swiss Commission, is to come in agreement with several MEPs in aim to take action after a vote procedure at the European Parliament, in Strasbourg. Many Greeks and foreign MEPs were present at the conference and requested the repatriation of Marbles in Greece.

The purpose of  Professor Sidjanski, is to collaborate with the Greek State in finding the right strategy to succeed in returning the marbles to their hometown.