IOBE: Recovery of the Greek Economy 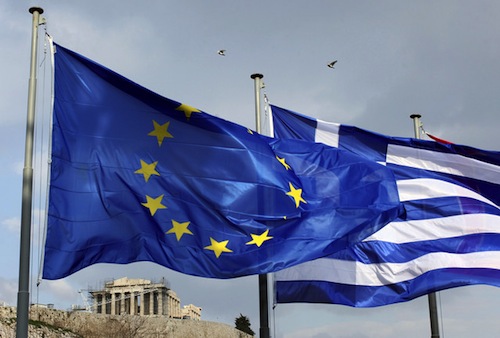 The Foundation for Economic and Industrial Research (IOBE) presented its latest report on the Greek economy today with positive estimations showing a slight decline in the recession and unemployment.
IOBE estimates that the recession of the Greek economy this year will be a little over 4%, going up to 4.1 to 4.2 %. Based on the latest revisions and projections, it is likely that the recession will be approximately zero in 2014.
However IOBE says that there are significant uncertainties and leftovers that could either lead to a weaker or better course than this.
According to IOBE evaluations, the halting of rising unemployment in the second quarter and probably during the summer period has an yearly average unemployment rate of 27.5% and 24.2% in 2012. This is an improvement from the previous estimation of an unemployment level ranging in 28.3 %.
The study results are presented by Nikos Vettas who is the General Director of IOBE and Angelos Tsakanikas, chief research officer of the Foundation.
They noted that regardless of individual and technical analysis on the details of the measurements and predictions, the twin deficits had a summarizing role in the chronic financial problems. At this moment, the fiscal and external are balanced close to the point of equilibrium and the prices are scaled downwards, whereas the six-year downturn is gradually coming to the end.
This stabilization of the economy signifies that the catastrophic scenario for the economy has now been removed as well as the necessary foundation for any improvement from now on.
The report also mentions, that in any case, achieving the stabilization should not be compromised. The idea that growth can be achieved through systematic deficits, as in the past , is naive and dangerous.
The Greek economy and society will have to accept the adaptation of two basic rules expecting to move under the respective limitations, which means that the increase of total consumption will be following the increase of productivity and consequently the public sector will not be able to spend money.
IOBE says that this adaptation and the resulting discipline, may be an important factor in recovery as it will make a direct challenge to increase productivity and competitiveness.
However this moment demands deeper and broader assessment and reflection. It should be stressed that if the necessary corrective reforms will not be clearly promoted with perseverance and a feeling of necessity, Greek economy will be in danger for a very long time; weak growth, incomes and productivity will be some of the characteristics.