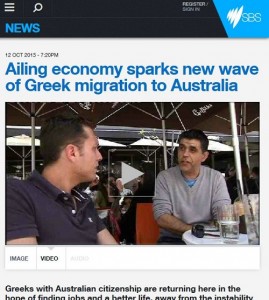 SBS has released a report for the new wave of Greek migration to Australia resulting from the crisis. Greeks with Australian citizenship are leaving Greece and heading to Australia hoping to find jobs and a better life, away from the difficult social and living conditions in Greece. Many of the new migrants from Greece arrive in Australia with the support of family and friends.

According to the figures of the Department of Immigration. The last fiscal year showed a significant increase in the number of Australian temporary and permanent visas granted for Greek nationals. As SBS reports, the increase was seen in nearly all Australian visa categories, with a significant rise in temporary visas, by up to nearly 70 percent. There is also an approximate 61.5 percent increase in the number of permanent immigrants under family and skilled migration routes during the period between 2011-12 and 2012-13.

Yiannis Veskoulis and his friend George Vynos are among the Greeks who moved to Australia to find a better future. Yiannis found work as a carpenter and George works as a mechanic.

“I miss some things from my country, but I find other things here, that I don’t have in my country. My future is here.” says Yianni, talking to SBS.

George stated of his life in Australia,”You can find a job and survive financially.”

Peter Jasoniadis knows the story well. He runs a college which offers courses in English, business, childcare and community services. Over the past three years he’s seen a large increase in the number of pupils. But he says  it’s tough and the new migrants are grateful for the support of family and friends.

He continued by saying, “They know that Melbourne, for example, is the third largest Greek city in the world. What they don’t know, are that the laws of migration in Australia are different to what they were 20, 30 or 40 years ago.”

With so many losing their jobs in Greece, those who lived here and went back, are now returning.

“I was without a job for 2 years in Greece, and at one stage,” says Nick Maniatis. “My sister lost her job as well, and that’s when I decided that I’m going to come back to Australia.”