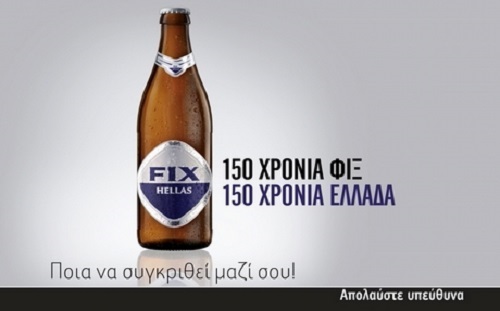 From September 5, 2013 until March 2, 2014 the residents and the visitors of Moscow will have the opportunity to see the famous sculptured costumes by Floros.

On the occasion of the accomplishment of 150 years since its establishment, FIX Hellas is transferring overseas an important segment of the Greek civilization, supporting Floros’ work. For the 150th anniversary of the Greek brand Floros created a new sculptured opera costume of Maria Callas, named “Violetta.” This piece of art is the trademark of  Callas’ legend that is rooted in Greece and has wings all over the world. Over 4,000 Fix Hellas aluminum cans were used in order to make this costume. Apart from the artist’s talent, you can also see the harmonious combination between blue and white, which refers to the Greek colors, the Greek flag.

The exhibition is under the auspices of the Hellenic Ministries of Culture and Sports and of Tourism, with the support of the Embassy of Greece in Moscow, as well as of the Hellenic Cultural Center of Moscow, proving in this way the strong bonds of the Greek-Russian friendship.

The entry of Cyprus for the 2021 Eurovision song contest has sparked wide controversy among ultra-conservative Christian groups on the Mediterranean island.
Diaspora