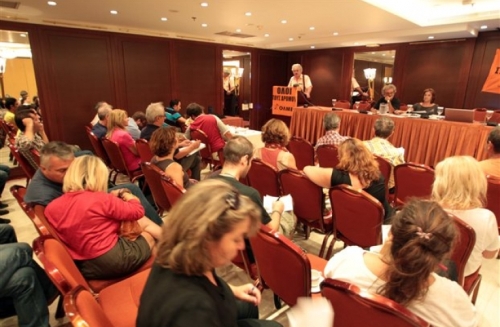 The strike’s end was decided by the presidents of the local unions of secondary teachers, ELME. The strike began on September 16, as the secondary teachers’ union, OLME, had launched five-day rolling strikes. The participation and support was impressive during the first days, but the financial difficulties that teachers face, led the strike’s front to collapse.
During the unions’ meeting, 30 ELME gave a blank vote, while 17 ELME voted for the strike’s suspension. On the other hand, 12 ELME voted in favor of a new five-day strike and five ELME for a new 48-hour strike.
At the same time, about 100 schools are still under occupation by students. The Greek Ministry of Education is working on a Presidential Decree that would extend the academic year for schools that are occupied for more than three days.
Teachers are included in the thousands of civil servants in Greece that are affected by a job redeployment scheme, demanded by international creditors in return for access to aid loans. Those who are on the scheme have to accept new posts or spend eight months on reduced salaries as alternative posts are found, with the risk of losing their jobs altogether. Overall, Greece has pledged to axe 4,000 state jobs and redeploy 25,000 public sector workers by the end of the year.