Born and raised in Greece, music composer Ioannis (Yanni) Goudelis moved to Los Angeles four years ago from Phoenix, Ariz., via way of Corfu. After studying Music at Arizona State University, and spending eight years in Phoenix performing with local Latin, jazz and flamenco artists, he set his sights on Hollywood.

It didn’t take long for the talented musician to make a name for himself, working alongside legends in the industry — he’s performed, recorded and opened for artists such as Stevie Wonder, Dierks Bentley, Ray Price, Mike Stern, Stanley Jordan, Pantelis Thalassinos and Alexia Vassiliou. You may have also heard some of his original music featured on television shows like “House,” “NCIS,” and a few of HBO’s series. In 2011, he scored the feature film “The Church Office,” and appeared last year on “Jimmy Kimmel Live!” with Miss Willie Brown.

Goudelis released his first album, “Life Goes On,” in 2007, and his latest, “Melodia,” hit digital download stores this past summer. Greek Reporter recently chatted with the composer to talk about his music and successful career in the industry.

When did you start composing?

At the beginning of my music career, I wasn’t composing. I was a kid, and still am [smiles], and I was performing mostly Greek music. Later on came the classical, jazz, blues, Latin, world music, etc. If I remember correctly, I composed my first song when I was 27. Late! This is one of the reasons I work hard every day on my craft. Composing to me is a gift where I can express and share my love, happiness, melancholy, and all the emotions we experience as human beings.

How did you get into working with television shows and movies?

I moved to Los Angeles to compose for film. I attended the film scoring program at UCLA where I scored a few short films. Soon after, I scored my first feature film, ‘The Church Office,’ directed by Nancy Bellany. Later, I received some TV placements with my music through a few music libraries.

How is composing music for television different than for film?

I believe that it all depends on the people you are going to collaborate with and the type of project. My personal experience with TV was through music libraries so I didn’t have any face-to-face interaction with the production of the show. However, in film I found it was incredibly important that the composer knows how to communicate about music in a nonmusical language with directors and producers. That way everyone is on the same page and I believe this is very crucial in making music for picture.

What is your favorite thing about making music?

Every aspect of it! The music itself, the artists and other performers you play with, the orchestra that plays your pieces, the audiences, all the travels and the good times! Also, one of my favorite things about music is improvisation, in which you get to escape to this other ‘space’ where there is no thinking involved, just being, like meditation. Last but not least, music never ends, you always want to hear new things, learn new things and compose new things!

Tell us a little bit about your latest album, Melodia, and what people can expect to hear when they listen to it. 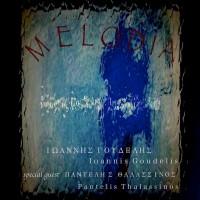 With this second album, Melodia, I feel I have come the closest to my true self as an artist. It is who I am as a person and where I am at this very moment. As to what people will hear when they listen to it, my best bet would be that Melodia is an album where the melodies take you on a journey to the Mediterranean and the old Greek romantic sound with a bit of a modern touch. I also believe that the music has to speak for itself and words cannot capture the emotions that someone feels when listening to a piece of music.

I had the great pleasure and honor of collaborating with Pantelis Thalassinos on the song, Eisai Edo Ma Kai Poythena, where he wrote wonderful lyrics and sang beautifully.

Where do you find inspiration?

I find inspiration in everything. However, most of my pieces have been composed out of emotions that had to be released in the form of music.

What is your long-term goal when it comes to making music?

To keep on doing it. To keep working at it and always try to make melody out of everything in life.

What advice do you have for anyone interested in becoming a composer?

Be yourself and keep it real. If it is in your heart and there is no other way, that’s the way. Embrace it and enjoy the ride!

Both of his albums, Melodia and Life Goes On, are available for digital download on iTunes, CDbaby and Amazon