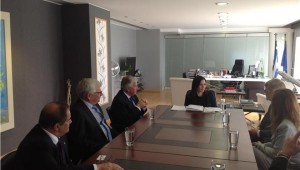 The President of the Legislative Council of the Parliament of Victoria Bruce Atkinson and the Speaker of the Legislative Assembly Ken Smith expressed their interest in investments in Greece to Tourism Minister Olga Kefalyianni in a meeting on Sept. 15.
Specifically, they discussed about the business interest and the investment plan in Ithaca, which provides the creation of a development which will also include golf courses, a sport which is very popular among the Aussies.
Atkinson and Smith congratulated Kefaloyianni for her work in the Ministry of Tourism, highlighting, in parallel, that according to the Australian data, the arrivals from Australia to Greece have increased by 28%, compared to the previous year.
Kefaloyianni presented the program of the Ministry of Tourism for the increase of the tourist flow to Greece, both from the traditional and from the so-called distant markets, as the Australian.
She stressed that the Ministry of Tourism encourages foreign tourism investments to help combat the country’s crushing economic crisis and bring in revenues to help modernize the tourist infrastructure. “Greece is a place which combines everything. It has a large story and culture. However, in parallel, it has a rich special tourism, as the athletic, the gastronomic and the marine tourism”, she said.
She also referred to the tourism of Athens, noting that there is a significant potential of growth. “It is a challenge for us to attract more visitors in the capital” she said and she mentioned the initiatives taken in order to boost the tourist traffic in the capital. The delegation visited the new Acropolis museum and archaeological sites.